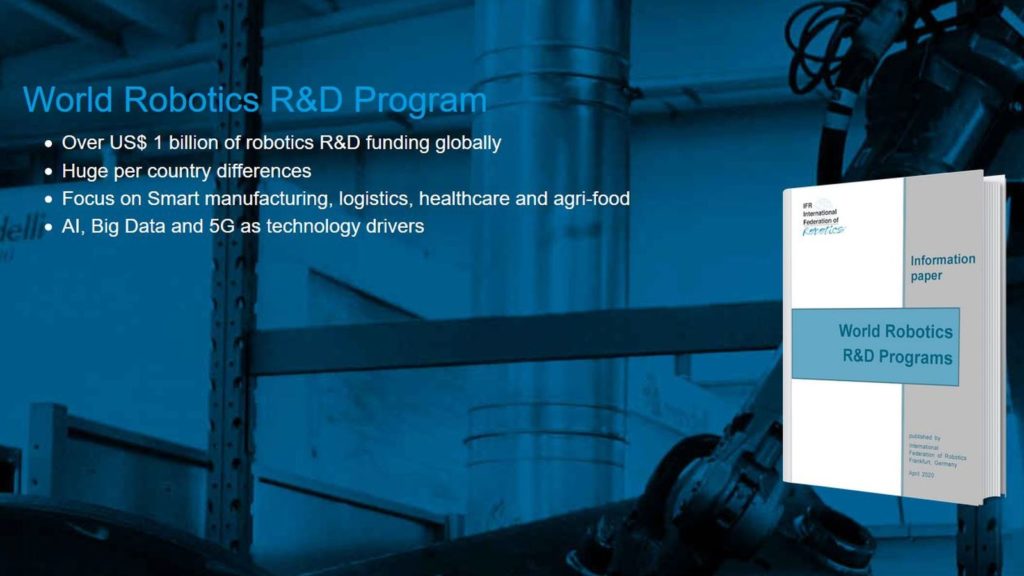 The IFR has released a new report on robotics R&D programs around the world.

Academic and commercial research and development are important to robotics. However, much of the current robotics R&D spending worldwide is still being directed by national governments interested in economic competitiveness, said the International Federation of Robotics. The Frankfurt, Germany-based organization today announced a report on its findings.

In “World Robotics R&D Programs” (download PDF), the IFR compared national initiatives among major robot-producing nations, including Japan, Germany, South Korea, and the U.S. All of them had the stated intention of increasing automation applications in manufacturing and other industries, but funding priorities differed widely.

“Each country has its own characteristics of robot programs based on its specific background and history,” stated Jong-Oh Park, a professor at Chonnam National University in South Korea and vice chair of the IFR’s Research Committee and member of its executive board. “Therefore, we see that robotics programs set up by the most advanced robotics countries have a very different strategic focus.”

The People’s Republic of China has made no secret of its desire to be No. 1, not only in the use of robotics, but also in robotics R&D and suppliers. Beijing’s “Made in China 2025” blueprint sets clear goals for manufacturing and other “core” industries, according to the IFR.

For instance, China’s Robot Industry Development Plan had set the following numerical goals for this year:

In fact, China reached a robot density of 140 units per 10,000 human workers in manufacturing in 2018, according to the IFR’s “World Robotics” yearbook. Last year, the Chinese government invested $577 million (U.S.) in the development of intelligent systems, said the organization. At the same time, China has had difficulty increasing innovation and productivity to U.S. levels during the recent manufacturing slump.

In Japan, the “New Robot Strategy” is a key part of the “Abenomics” growth policies (named after Prime Minister Shinzō Abe), said the IFR. Japan increased its robotics R&D budget for 2019 to $351 million with the intention of making it the leading robotics innovation hub in the world.

In addition to manufacturing, Japan’s action plan includes healthcare, agriculture, and infrastructure, said the IFR. In 2018, Japan was the world’s No. 1 industrial robot manufacturer, delivering 52% of the global supply, according to the organization. Japan’s aging population will likely increase demand ahead of other countries, but it also will have fewer obstacles to public acceptance.

The IFR’s “World Robotics” yearbook found a new record stock of 300,000 operational industrial robots, a 10% increase, in Korea in 2018. Within five years, the country has doubled its number of industrial robots in operation, earning it the rank of third place in 2018, behind Japan and China. The EU’s 2018-2020 Work Program includes funding for the digitization of industry through robotics, new applications, and core technologies such as AI and cognition, cognitive mechatronics, socially cooperative human-robot interaction, and model-based design and configuration tools. It has a total budget of $173 million, the IFR reported.

European responses to economic developments such as the U.S.-China trade conflict or the novel coronavirus can be hampered by a regulatory patchwork.

Within Europe, Germany is the fifth largest robot market in the world and No. 1 in Europe, followed by Italy and France. Germany’s High-Tech Strategy is intended to encourage the use of new digital technologies within industry and administration, said the IFR.

The “PAiCE” program, which has a budget of 50 million euros ($55 million) over five years, emphasizes the development of digital industry platforms as well as collaboration among companies. European market projections for service robots, as of 2016. Source: PAiCE

In particular, Germany is supporting the creation of service robots for application in multiple markets. In 2018, the number of robots sold increased by 26% to almost 27,000 units — a new record, according to the IFR.

The U.S. takes a different approach to robotics R&D

Most robotics efforts in the U.S. can trace their origins to military initiatives, from navigation to assistive systems. At the same time, an entrepreneurial culture and private investment have led to innovation without the same levels of government direction as in other parts of the world. There have been efforts toward national strategies for robotics, artificial intelligence, drones, and autonomous vehicles, but the U.S. does not have a unified industrial or automation policy.

The National Robotics Initiative (NRI) supports robotics R&D, with a “focus on fundamental science, technologies, and integrated systems needed to achieve a vision of ubiquitous collaborative robots assisting humans in every aspect of life,” said the IFR.

NRI-2.0 encourages collaboration between academia, industry, nonprofits, and other organizations, as do groups such as the Advanced Robots for Manufacturing (ARM) Institute and regional robotics clusters. The budget of NRI for 2019 was only $35 million. The U.S. National Robotics Roadmap is currently in revision. As the COVID-19 pandemic has demonstrated, unified and decisive national leadership can be effective when dealing with multinational crises or public well-being. At the same time, privately led robotics R&D in the U.S. is more responsive to investor and industry interests. Such innovations are more likely to advance technological capabilities and result in commercially viable systems.