Do industrial robots really have a positive impact on employment? Of course they do and there are over 50 years of data proving that to be the case.

There are at least 350,000 people directly employed by and in the industrial robotics industry. However, industrial robots are not made in the U.S.; they are made in Japan, Korea and Europe, consequently more than half of those 350,000 jobs are offshore.

There are ancillary providers of components, software and other services for robots and installations but these jobs are hard to quantify. In general manufacturing there are known multipliers but in robotics, there is no known formula to extrapolate just how many jobs in these ancillary businesses are attributable to robotics.

The deployment of robots into a factory situation involves even more complex computations and assumptions — which is why the International Federation of Robotics (IFR) commissioned the UK-based research firm Metra Martech in 2009 to figure out how to compute the effect on jobs of the deployment of industrial robots.

The IFR annually collects, reports on shipments and sales, computes robots at work (versus idle or abandoned), and makes five-year sales and deployment projections of industrial and service robots worldwide. They summarize their data into two comprehensive books: World Robotics Industrial Robots 2012 and World Robotics Service Robots 2012 reflecting data for 2011. The 2013 books covering 2012 data will be available later this year.

Metra Martech’s original report was delivered in February, 2011. It concluded that they had determined a job-creation ratio of 3.6 jobs for every robot deployed and that with more robots, fewer jobs are lost. That’s why Germany, with hourly rates almost 50% higher than in the U.S., has remained globally competitive: they have twice as many robots per 10,000 workers as do Americans. 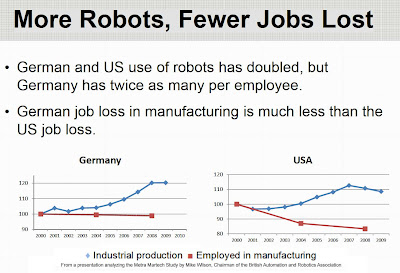 Their research claimed that 3 million jobs were created in factories where accuracy and consistency could not be achieved without robots; and another 300,000 jobs were created where poor working conditions were overcome by the use of robots.

Much has happened during and since 2008, the unfortunate base year for that report, which is why the IFR re-commissioned Metra Martech in 2012 to update their findings for more recent data.

Early this year CBS News 60 Minutes aired a segment asking but not answering the question: Are robots hurting job growth? Much criticism from robotics industry professionals followed and included an International Federation of Robotics CEO press conference where an abstract of the updated version of the Metra Martech report was presented. Under the banner Robots Create Jobs, they cited the following reasons why they opposed the CBS 60 Minutes piece and why robotics really does create jobs:

It is the #4 and #5 items which are of interest to most readers and particularly Americans who, by and large, perceive a different set of “facts.”

Americans are living through a confusing economic period. They see things in “home economics” terms: job creation is up but nowhere near covering population growth; unemployment has dipped slightly but hides the broader unemployment rate; stock markets are reaching new highs; and house prices and disposable income are both rising. Yet public sentiment is focused on jobs and job creation and for good reason: millions have fallen off the employment grid and the employment figures don’t reflect the true numbers nor the hardships this has caused.

Hence the concern about jobs being taken away: about being left behind, about off-shoring, robots, relocation, acquisition, closures, consolidation or otherwise.

John Dulchinos, former CEO of Adept Technologies, said at the IFR press conference when the revised report was launched (and reiterated in a recent email):

“Assessing job creation driven by robots is not an exact science and requires piecing together data based on a consistent set of assumptions.

“Over the past decade the US has lost 6 million manufacturing jobs. This is not the result of robots. It is largely due to offshoring by contract manufacturing companies who have taken a large slice of the manufacturing pie. What is not captured in all the government data is the number of downstream non-manufacturing jobs that disappear when a factory is no longer competitive with low-wage nations and is shut down.”

Part of the complexity of the Metra Martech report is that it must take into account the economic, population, industry variables and downstream multipliers unique to each of the main countries in the study. For example, manufacturing accounts for only 11% of employment in the U.S. but 24% in Germany and 27% in South Korea.

I asked Metra Martech’s Peter Gorle whether they relied solely on the IFR data or if they supplemented it with other data. Gorle responded by saying:

“The basic data on robot use came from IFR, but we at Metra Martech carried out considerably more research into the employment and unemployment figures and the growth rates in the main user sectors. This provided the fundamental position against which the use of robots was analysed.”

Then I asked how they attempted to report the number of people employed through the use of robots net of the number of workers displaced by robot deployment:

“While it is clear that robots can and do replace unskilled, dirty or dangerous occupations, there are two main drivers for added employment resulting from the use of robots. The first is the need to use the repeatability and accuracy which they can provide. Note that this is evident throughout the world no matter what local labour costs.

“The second driver is the need for industrialised countries to overcome the benefit which the low wage countries offer in production. This tends to result in the loss of some jobs, but it enables companies to retain employees in parts of industry which would otherwise be lost to lower cost areas.

Since most of the conclusions reached by Metra Martech are global in scope and conjectural in nature, it is important to examine the extent of their assumptions. One can see their process at work in the discussion of the chart shown below for the Electrical and Electronics sector:

“Hypothetically, if robots were removed, some products would become unviable, while others would move to low cost countries and be assembled by hand. Many tasks carried out in this sector [Electrical & Electronics], particularly by SMEs (SME refers to Small and Medium-sized Enterprises, i.e., small shops, factories with less than 100 employees), are still done by hand. The loss of jobs would thus be greater in the developed countries, and the gain in jobs greater in the lower cost industrializing countries. There are no statistics on this type of dependence and we have made broad estimates based on the above and the number of robots in use in the country in the sector.” 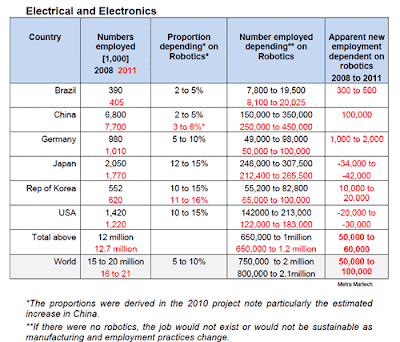 Many of the assumptions in the updated Metra Martech report are sufficiently transparent such that one can readily accept their position and therefore their conclusions. Thus their projection of 2.15 to 3.5 million new jobs from 2012 to 2020 appears correct:
Although they don’t really address statistically what happens to displaced workers; they do say that they are often kept, retrained, and utilized in upscale jobs created as a result of the efficiencies reaped from the new robots. But they don’t provide any numbers or formulas to support this thesis.
The updated report moves away from a strict focus on industrial robotics suggesting that SMEs and healthcare/medical robotics will show broad job growth in the next few years. Thus 21% to 24% of Metra Martech’s potential new jobs projections include service robots marketing and manufacturing. They rationalize this contradiction by saying that service robots can be likened to consumer products and therefore will need new manufacturing requiring robotics.
Two areas stand out as seriously unsubstantiated in the report:
Offsets for jobs displaced, although frequently mentioned in the report, could not be measured with the data available.
Downstream jobs include (1) employment in ancillary businesses which are needed to support robot construction, robotic installations, robot control, and (2) jobs created by adding well-paid robotics industry employees into the community. Metra Martech suggests a third group to be (3) other types of jobs in support of the use of the products manufactured where the products can only be produced by robots.
In manufacturing, an industry statistic to reflect downstream ancillary jobs is 1.3 jobs in a support business for every new job in manufacturing. This multiplier effect is frequently validated in general manufacturing. But applying that figure in the robotics industry is difficult because it relates to jobs whereas the Metra Martech projections apply to robots deployed predicated on the data provided by the IFR. Nowhere in their report is there a correlation of the number of jobs replaced by a single robot thus a true downstream jobs figure cannot be tabulated.
Consequently, I find the Metra Martech report somewhat flawed but not for lack of trying. It was a noble effort and remains a valuable tool showing that the robotics industry really does create jobs.