[This article first appeared on pages 191-198 in “World Robotics Service Robots 2013” published by the IFR (International Federation of Robotics) Statistical Department. Copies of that book and its companion “World Industrial Robotics 2013” both of which can be purchased here. It is reprinted with permission from the publisher.]

Robotic start-up companies range from the whimsical to the amazing, from futuristic to topical, and from hubs of robotic activity in Silicon Valley, Boston, New York City (a new hub) and Switzerland to far-off places around the world: Turkey, Tel Aviv, Moscow, Christchurch, Reykjavik, Singapore, Shenzhen, Buenos Aires — essentially, everywhere that programmers program and engineers tinker. 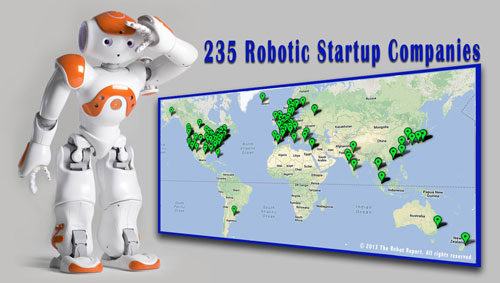 Robotic projects often get funded for strange reasons. Many are at the whim (in scientific circles they call it “inspiration”) of researchers attempting to conquer an interesting scientific challenge.  This often translates into commercial projects just to get the funding to continue to do research. Many crowd-funded projects fit into this latter category. Others are funded to solve specific as-yet-undiscovered methods of doing something that needs to be done. The space and defense programs (NASA and DARPA) are perfect examples of the latter and are referred to as “strategic funding” and there’s a whole industry of technology transfer to make their inventions into commercial ventures.

In the last few years, the influence of crowd-funding is shaking things up and can be seen in some of the start-ups cited above. Kickstarter, Indiegogo and Angel List have all had their robotic hits – some even raising millions. TechJect‘s Dragonfly is an example. The spin-off from GA Tech raised over $1 million on Indiegogo! 3D printer start-ups also did quite well and FormLabs‘ Kickstarter campaign was a record-breaking $2,945,000 from 2,068 backers (FormLabs was only seeking $100,000)!

Crowd funding may be a passing fad, but for the last couple of years these types of sites have provided start-ups with a quick sense of whether their idea will sell to the public or not — and they don’t require giving away equity. Crowd funded projects also pop up on the radar of venture capitalists searching for interesting new ventures. There is no doubt that slick marketing and performance videos do well in that environment. Also, equity crowd funding is coming; the Securities and Exchange Commission is working on the rules.

Nevertheless, crowd funding is here to stay and will soon include equity as a perk of investing. Further, it is spreading globally. Although robot start-ups and other long-lead projects don’t get as much attention as some of the other projects, the number of robotics-related crowd funded projects is up and the sophistication of the presentations is also up – both a boon to getting the attention of serious equity investors (VC’s and hedge funds).

Finally, a review of the makeup and geography of 235 start-up companies can be seen in the chart below. Robotic start-up companies are privately held robotic companies established to develop a concept or product or robotic-related service for sale but don’t yet have it all together. From the chart below one can see that few are attempting to become industrial robotic manufacturers; instead, most are offering service robotic solutions for industry, home use, health care and academia.