Just like with human drivers, rain, snow and fog can all distort a self-driving car’s vision. Self-driving cars operate mainly in sunny, warm places during the day, to avoid potential weather-related complications.

Waymo, whose robotaxis can see 360 degrees around the car and over 3 football fields away, is looking to better combat weather conditions, and it’s starting in San Francisco, where any day there is a one third chance of fog, according to the National Oceanic and Atmospheric Administration (NOAA).

Waymo began its robotaxi service in Phoenix, Arizona in late 2020, and has only been operating in San Francisco since August 2021. In that time, it utilized several different methods to teach its autonomous driving system how to adjust to the fog. The first is with weather testing with mobile weather stations. These stations, vehicles with extra sensors to detect weather conditions, are tasked with collecting data that can be used to teach Waymo’s self-driving system how to detect fog.

The second involved the three different kinds of sensors, LiDAR, radar and cameras, Waymo’s vehicles use to perceive the world. These sensors use hydrophobic film, pulsed air puffers, wipers and other technique to stay clean during inclement weather.

While LiDAR, which emits laser beams that bounce off objects to create a 3D image of the surrounding area, and cameras aren’t as effective in the fog, radar can be. Waymo’s fifth-generation radar uses microwaves instead of light to create an image of the world around the car, which makes it a better sensor for driving in the fog. 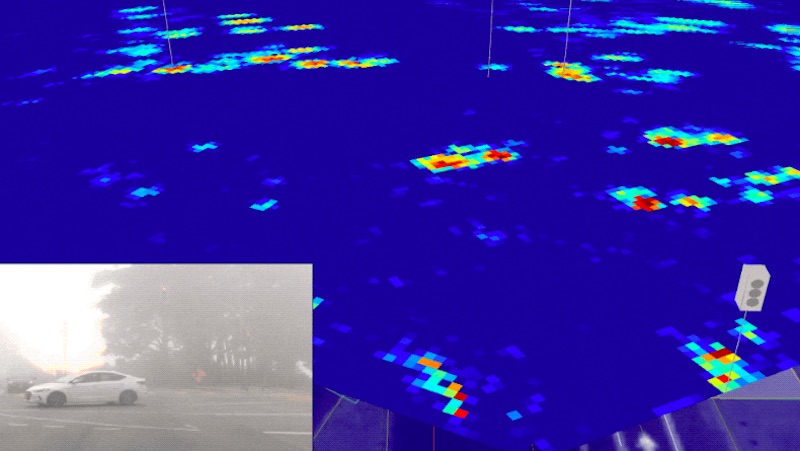 Waymo said its fifth-generation radar complements LiDAR and camera with its ability to instantaneously measure velocity and see through weather conditions such as fog. | Credit: Waymo

Waymo doesn’t only test weather and driving conditions in San Francisco. Its mapped streets in Arizona, Death Valley, Miami, Michigan, San Francisco, Washington State, and most recently New York City. Waymo uses all of this information to teach its cars.

Waymo currently has robotaxis operating near Phoenix, Arizona, where they give fully autonomous rides, and San Francisco, where all rides are with human safety drivers. Cruise and Waymo were both to give autonomous taxi rides in California in October 2021.

Unlike Waymo, Cruise was approved to give fully autonomous rides in California. Cruise began giving rides earlier this month to its employees.