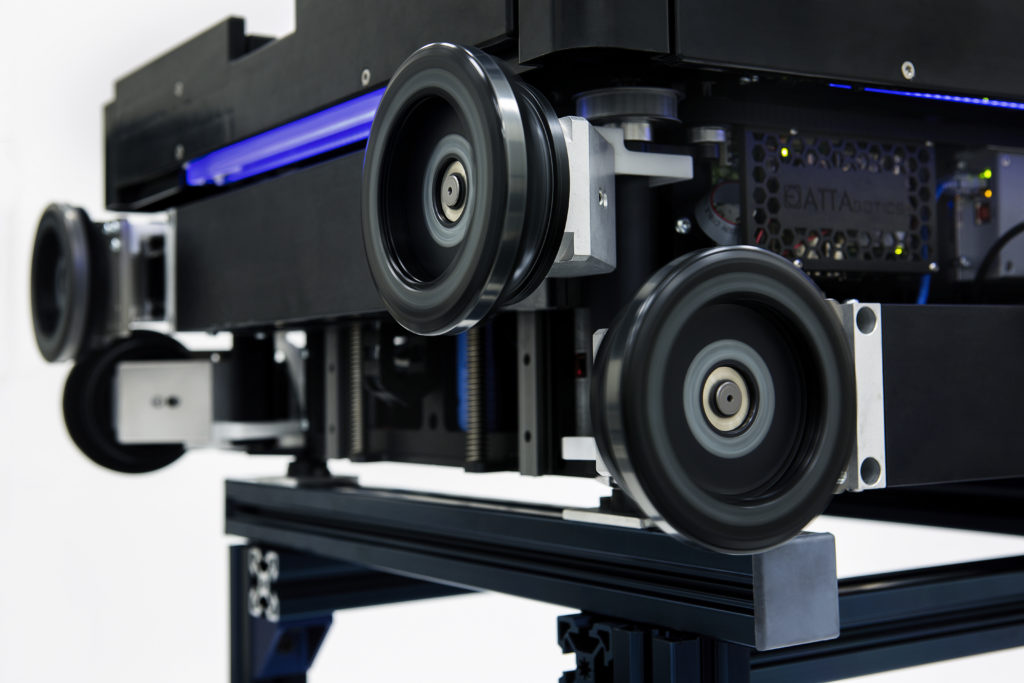 The industriousness and efficiency of ants is well-known, and they have inspired one company working on supply chain automation. Attabotics makes a goods-to-person automated storage and retrieval system that includes robotic carts that can move in three dimensions, just like ants in a colony.

“The original inspiration for the company was the leaf-cutter ant, whose Latin name is ‘Atta,'” said Scott Gravelle, founder, CEO, and chief technology officer of Attabotics. “Their biomass outweighs that of humanity, but we hardly notice they’re there. The idea is that a simple set of rules can build complex behaviors. Ants don’t know how to build bridges, but they know how to hold onto their friends.”

Last month, Attabotics raised $25 million in Series B funding. “Counting seed and angel capital, it was our fifth round so far,” Gravelle said. “Our technology is deployed in six sites in different market verticals. Given the newness of the company, which was formed three years ago, the amount of interest and adoption is incredibly encouraging.”

“While it’s important to remain independent, we’re privileged and honored to receive investment from Honeywell and others,” he said. “It’s a vote of confidence from partners with a like-minded vision of the supply chain market.”

“I was originally in factory automation,” Gravelle told The Robot Report. “We had reached out to Kiva Systems looking to use its technology in buffering operations at the end of the production line. The receptionist turned us down, because Amazon had just acquired it.” “That sent me down a rabbit hole, mostly out of curiosity,” he recalled. “Robotics had just been validated by one of the biggest players, creating a business opportunity.”

“I started looking at the industry with the advantage of a fresh perspective,” said Gravelle. “What I saw was that most automated systems were evolutions of a human-centric, 2D environment, with roads or aisles providing access to goods.”

“Autonomous mobile robots such as those from Locus Robotics or 6 River Systems are fascinating and have their place,” he said. “We have a completely different value proposition. I tried to find a cost-effective solution, not an incremental improvement on human performance.”

“I took inspiration from the TED talk by Kiva founder Mick Mountz and conducted a thought experiment about what would be ideal for a robot and not a person,” he said. “I saw a documentary where a researcher had poured molten aluminum down an ant colony and then dug it up. Ants integrate goods vertically.”

“I played with some math — taking advantage of the ceiling height of most warehouses, we could take up less than 6% of the area of manual operations and less than 12% of that used by Kiva,” Gravelle explained. “I then worked out the logic of how to interact with the storage matrix and spent the next two years reaching out to automation companies and 3PLs [third-party logistics providers], seeing who else was interested.”

Gravelle described his approach to building the technology and the startup. “We started with a blank sheet of paper and created a fulfillment system tailored to modern commerce,” he said. “It’s incredibly flexible, combining the highest-density automated storage and retrieval system [AS/RS] with sortation, sequencing, and handling.”

“Attabotics’ shuttle moves in three dimensions and can deliver items in any sequence to any location on the perimeter,” said Gravelle. “It’s pick, pack, and discrete shipping with one algorithm. There’s no need for putwalls or sortation conveyors.”

Not only does Attabotics’ system, which has intellectual property (IP) protection, enable rapid and space-efficient order fulfillment, but it also allows for inventory to be stored in ways that they wouldn’t be if picked by people.

“We’ve also decoupled throughput from storage volume,” Gravelle said. “With a modular environment, there is no need for defining or engineering future workflows. If you have linear conveyor systems, future workflows are defined by the infrastructure.” While Attabotics uses some off-the-shelf components, it makes its own robots, racking, bins, and software. Gravelle observed that his background in manufacturing makes it easier to scale up.

“We use some proven industrial mechatronics pieces like gearboxes, servos, and control systems in our shuttle, but they’re in a unique configuration assembled in Calgary,” explained Gravelle. “The pick-station interface and software we make in house. With our modular infrastructure, we can interface with conveyors, box makers, and piece-picking systems.”

“Our software-defined environment can be tailored to customer needs without unbolting things from the floor, future-proofing the solution,” he claimed. “We combine the functionality of storage, retrieval, and buffering. When you combine the 85% space savings from shuttling with the rest of the footprint, that’s where the ultimate savings come in. We eliminate complexity in control.”

“On the inbound side, our scanning technology and APIs [application programming interfaces] integrate with any WMS [warehouse management system] that we’ve encountered,” Gravelle said. “Because we manage everything within our system, we just ask the WMS to look at us as part of the system, with inputs and outputs.”

“Looking at the biggest e-commerce players, 99% of their stuff fits into our totes,” said Gravelle. “As a Canadian, I like to say that we’re good at hockey pucks, not hockey sticks. We’re developing the nontechnical aspects to do the merge between non-conveyable goods and our system seamlessly. We’re in talks with other robotics providers for such goods.” This square tote is larger than standard for AS/RS. Source: Attabotics

“Going back to the naturally inspired simple rules leads to efficiencies,” he said. “Attabotics’ system calls the closest robot and automatically puts the most popular items at the perimeter. We don’t have to do slotting; the algorithm does it.”

“There are advantages to creating a supply chain with unified tote-based ecosystem,” he said. “If we don’t rely on conveyor-based technology for distribution, we could someday serve clients without needing as many cardboard boxes. That would get rid of the bulk of cargo, and gig [economy] partners could use totes to deliver goods in the same way Uber Eats and DoorDash do today — in a bag.”

Micro-fulfillment and a vision of future supply chains

“The flexibility of our design allows us to take full advantage of all these new opportunities, including grocers and brick-and-mortar, big-box stores,” noted Gravelle. “We’ve seen a lot of inbound interest in micro-fulfillment centers.”

“When we talk about ecosystems, we’re talking about a way to marry the supply chain — such as dark warehouses or micro-fulfillment sites — and decanting kitting processes to support micro-sites,” he said. “It’s not just the warehouse in a single building, but also different granularities of technology to support consumer goods, groceries, and e-commerce. That’s our grand vision — to create what’s needed for the supply chain of the future.”

“Amazon has done an amazing job of defining the decentralized, multimodal approach,” Gravelle said. “Walmart, Target, and Kroger have money, but many others are looking for some solution. Some are looking at using our technology in a multi-tenant environment.”

“One of the biggest constraints on modern commerce fulfillment is people. The goal is to leave people the most human work, not walking or pushing a cart,” he asserted. “Our goals are to avoid turning people in warehouses into machines and to move fulfillment and jobs back into cities. Now, labor may be an hour and a half out, and instead of dealing with a person at a store, the worker is fulfilling purchases in a 1.5 million-sq.-ft. facility. We want workers and consumers to have the best possible experiences.”

“We’re looking at developing a freezer variant of our technology that promises energy savings of 50%,” Gravelle said. “It’s on our roadmap right now for grocery micro-fulfillment.”

“We’ve had conversations with all the major players in that industry,” he said. “There’s a great deal of appetite for automation, as we’ve seen with CommonSense Robotics, TakeOff Technologies, and Alert Innovation with Walmart.”

Attabotics has grown from 40 people 18 months ago to about 200 people. “We’re adding 50 people to the team by the end of the year,” said Gravelle. “The Canadian government has been very supportive and wants to keep the IP in Canada.”

“We moved out of the research and development shop in March of last year, and we just moved into a 72,000-sq.-ft. facility,” he said. “We’re quadrupling manufacturing capacity by the end of the year.”

Attabotics is looking for a second manufacturing site to serve North America and is opening an office in Southern California to be the base of its U.S. operations. The company has already seen demand from companies of varying sizes.

“We’ve seen projects as small as 1,000 totes for micro-fulfillment with a 3PL doing medical supplies,” Gravelle said. “The largest is 194,000 totes, and remember that our totes are larger than standard, so that’s more like 250,000. It’s being commissioned in phases in omni-channel retail fulfillment for a brick-and-mortar store chain.”

“We’re still learning every day, working with client partners that have different business rules and different outcomes based on them,” he said. “We’re seeing how to best use our technology in their environments, and we’re excited to see what the future will deliver.”