In March 2012, in an effort to make their distribution centers (DCs) as efficient as possible, Amazon acquired Kiva Systems for $775 million and almost immediately took them inhouse.

There was confusion after the acquisition whether Kiva would continue providing DCs with Kiva robots. Although Kiva said that they would continue selling their technology to other retailers it soon became clear that Amazon was taking all Kiva's production and that, at some future date, Kiva would stop supporting their existing client base and focus entirely on Amazon – which happened in April 2015 when Amazon renamed Kiva to Amazon Robotics and encouraged prospective users of Kiva technology to let Amazon Robotics and Amazon Services provide fulfillment within Amazon warehouses using Amazon robots.

Consequently there has been a scramble of new providers to fill the void left by Kiva's technology, warehouse software systems and robots being removed from the marketplace. Many of these startups were showing their robotic systems at MODEX 2016 held at the Georgia World Congress Center in Atlanta. MODEX is a big material handling equipment, technology and systems show with 850 exhibitors, 250,000 sq ft (23,225 sq mt) of expo space, 100 informational seminars and over 25,000 attendees.

Kiva's robots and inventory management system were breakthrough technologies in 2011 and 2012 enabling items that were to be shipped to be brought to the packer near the truck door instead of the more traditional method of the picker/packer going out into the warehouse, picking the goods, and returning to pack and ship them. At the time Kiva started operations, robotic picking was still a premature science, consequently Kiva focused on managing the rest of the process: receiving, depalletizing and storing items and bringing dynamically-stored shelves containing ordered items to the picker/packer to pick, pack and ship while the Kiva robot returned the shelves to the most appropriate area in a free-form dynamic warehouse and autonomously went off to bring the next shelf to another picker/packer.

[To read the details about how a Kiva robot is made, click here.]

Although vision systems and grasping technologies have improved since then, they still aren't fast and flexible enough to replace humans so, instead, most new systems attempt to augment humans by reducing what they have to carry and the distances they have to travel to get the items that were ordered. 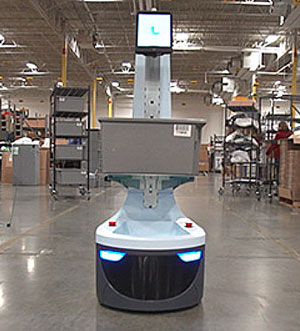 Mobile platform systems are designed to work across multiple environments – DCs, warehouses, factories – and are autonomous mobile platforms that can be fitted with special-purpose payloads such as for receiving, restocking, inventory, moving material from work cell to work cell, picking, supporting human pickers, packing and palletizing. Many vendors have provided AGVs, carts, lifts and tows, and have done so for many years. The older versions of these systems use markings, tapes, beacons, sensors and other things on the floors and ceilings to provide location information. Newer systems use the latest 3D vision systems, collision avoidance and mapping software to easily enable autonomous point-to-point navigation. Seegrid calls today's vision guided vehicles the next generation of AGVs. Many vendors have, for years, provided material handling AGVs used to tow carts and pallets around warehouses, hospitals and factories. They depend upon beacons or floor and wall markings for their navigation and are efficient but klutzy.

Erik Nieves, who previously was Director of Technology for US Yaskawa Motoman and is now in stealth mode with his startup Plus One Robotics, said:

“Perfecting perception and grasping have been major holdups – particularly for the applications that most factory and warehouse executives crave: autonomously loading and unloading trucks and containers, and 'each picking' (the automated means to handle and package goods). The development of these technologies has been hindered by the acquisition of Industrial Perception (IPI) by Google in 2013. IPI was at the forefront of clever AI combined with ranging sensors and cameras in being able to quickly identify, categorize and instruct the robot how best to grasp random objects. Since their acquisition, their technology is no longer visible to the market.”

As an aside, Seegrid recently held a contest to acknowledge journalists covering the materials handling industry and they awarded The Robot Report third place at an Awards Celebration event held after hours at MODEX in Atlanta. First place went to John Hitch, a staff writer at New Equipment Digest; second place went to Bob Trebilcock, Exec Editor at Modern Materials Handling. Thanks very much.