In a presentation at InnoRobo, the Innovation Robotics Summit held March 23-25 in Lyon, France, Sang-Rok Oh, from the South Korean Institute of Science and Technology (KIST), and an advisor to the government on r-learning, described the early childhood project that many of us have read about. Most of the stories, however, have elicited concern that our children are soon to be schooled by robots instead of humans.

This is quite a different message than Mr. Oh spoke of when he described the classroom use of the iRobiQ robot and how it supplements, augments and assists the teacher.

Teaching and tutoring English is one of the tasks, true, but the project is significantly greater. It is a paradigm shift to digital educational practices from traditional methods, to augmenting teachers with the teaching assistants they can’t afford, and to relieve them of mundane tasks whilst freeing extra time for them to teach.

There are 8,400 kindergarten classes in South Korea.  By the end of 2011 3,000 of them will be involved in the r-learning program and equipped with an iRobi Q teaching assistant robot.  Some classes will also have a Genibo robot dog.  Mr. Oh says that by the end of 2012 5,000 classrooms will be part of the program.

His group at KIST, plus teachers and teacher groups, are working to develop additional tasks for the robots – tasks that take the mundane time-consuming chores from the teacher and distribute them to the students and the robot thereby making more quality teacher time available for the students. They are also working on adding content so that the children don’t outgrow the platform.

He discussed delays due to the conservative infrastructure but stressed the commitment of the South Korean government to move forward with r-learning not only in kindergarten classes but onwards from there.

He showed a video of the kids checking themselves in with the robot at the beginning of the day (attendance taking) and getting the robot to photograph and store their art and other materials into their online digital library which their parents and teachers can see whenever they choose to log in. He also had a video showing Dasa Robot’s Genibo robots being used to lead PE and story-telling sessions.

Both speakers referenced the South Korean government’s 2008 plan (the Special Law) and $1 billion investment involved in developing r-learning, English language proficiency, and agricultural automation.  Mr. Shin also told of the Japanese government’s program to stimulate agricultural automation, provide consumer-level and professional cleaning robots and to sustain Japan’s 20% annual growth in providing worldwide robotics and also of China’s focus on manufacturing, space, defense and cleaning and cooking robots. All of these public-private partnerships are jointly funded by governments and industry with the government spearheading scientific challenges.

Mr. Shin said that South Korea is attempting to achieve tech leadership within 10 years.  [This is particularly timely in that the UK’s Royal Society, their national academy of science, just released a study indicating that China would surpass the US in scientific output in the next few years, perhaps as early as 2013, but surely within this decade.]  Other goals for South Korea are to export surveillance robots and to provide eldercare robots within five years and personal assistant robots within ten.

One way that the government’s support is helpful is in enabling massive test markets directed toward achieving a national strategic goal – for example, insuring that Korean children are able to speak English so that they can be schooled abroad and bring their education back into play at home.

Part of the Special Law – and the $1 billion stimulus – is to launch up to 500 businesses and provide 80,000 new jobs in the robotics industry by the end of the decade. 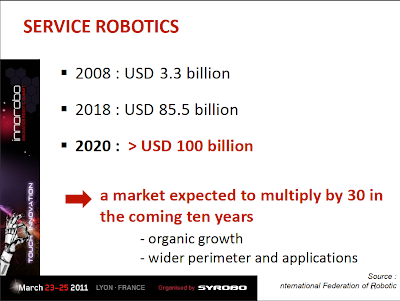 Bruno Bonnell, President of the French Union of Service Robotics (Syrobo) and Chairman of RoboPolis, in his presentation at InnoRobo in Lyon, France, said that the service robotic market would have growth of 30X the current rate this decade and be a $100 billion per year industry in 2020.

These governmental (Japan’s, South Korea’s, Taiwan’s and China’s) robotic stimulus programs have been undertaken with this $100 billion industry in mind.  Gaining market share in this industry will provide jobs and revenues to these strategic early planners — America take note.