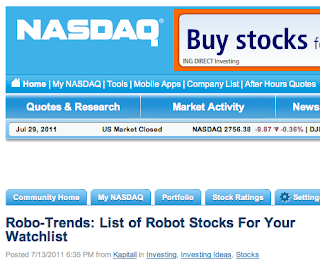 In early 2008 I asked my Merrill Lynch broker for a list of stocks of American robot manufacturers. He couldn’t provide me with more than two. So I went online with Bloomberg and found a list of 120 companies involved with automation. When I researched them, there were only a few in the U.S. and fewer still where robotics was the principle business.

Today, in the article which appeared under the NASDAQ banner shown above, it is clear that things haven’t improved since 2008. The list is full of errors, omissions and was selected by market cap — yet most of the companies are conglomerates with only a small portion of their sales from robotics, thus market cap is meaningless as regarding robotics. As a consequence, not much of the information is of value even though the topic is relevant.

Globally, there are slightly more than 250 publicly-traded robot manufacturers.  In the U.S. and Canada, the list is small but quite interesting.  Here are 16 – in addition to the 4 shown above – to whet your appetite:

Since my experiences in 2008, and because of a personal belief that the robotics industry is the place to invest for the future, I have carefully compiled a proprietary list of global publicly-traded stocks reflecting all aspects of the robotics industry. I monitor and report upon these stocks monthly in a performance/comparison chart, the Global Robo-Stox™ Comparison to the NASDAQ Index, the latest version of which can be seen and reviewed on The Robot Report website.