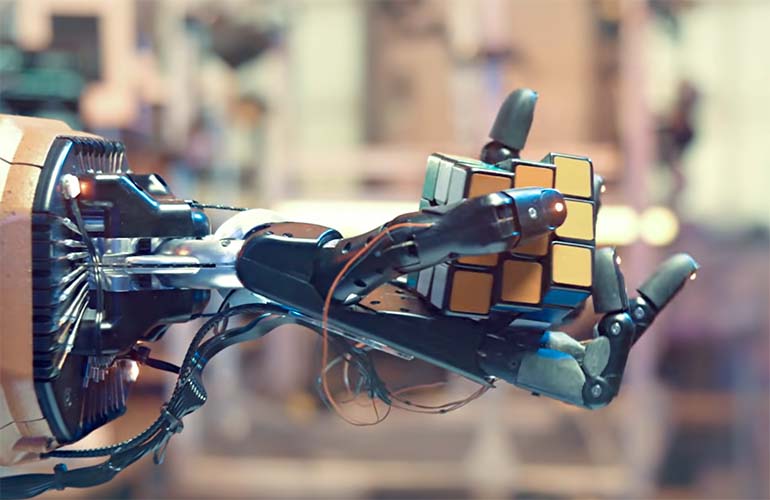 OpenAI developed a model that enabled a single-handed solution to a Rubik’s cube. | Image credit: OpenAI

According to OpenAI cofounder Wojciech Zaremba, the company recently disbanded its robotics team. This announcement was made by Zaremba during a recent podcast interview with Weights & Biases host Lukas Biewald, and first reported in this story by VentureBeat.

“I actually believe quite strongly in the approach that the robotics (team) took in that direction, but from the perspective of AGI (artificial general intelligence), I think that there was actually some components missing. So when we created the robotics (team), we thought that we could go very far with self-generated data and reinforcement learning,” said Zaremba.

Zaremba added that he has no regrets for the investment OpenAI made into robotics. “I think that we have plenty of insights for other projects. I also think that we built amazing technology.”

The company will continue to invest in other areas where there is adequate data for training. In Zaremba’s eye’s, work in this area might continue once there are powerful enough video models to support the training data sets necessary for building a viable model. Zaremba said, “the problem with video models is that they require way more compute than text models.”

The company famously used its AI tools to train a robotics hand to solve a Rubik’s Cube by manipulating the cube. The output of this research can be seen in the following video:

If you really want to go deep, check out the research report on solving Rubik’s Cube with a robotics hand.

The Weights and Biases interview with Zaremba is an insightful one if you are an AI researcher. The state of AI is currently evolving quickly, yet we are still decades away from artificial general intelligence. Zaremba makes the point that compute and lack of data are two of the cornerstone requirements for any AI-based application to be viable. Thus, when deciding whether a problem can be solved with AI, you must first ask “is there enough data to train a model.” Ideally, this is hundreds of thousands or even millions of data points for the base data set.

Today, even text-based applications are still in their infancy. While AI can quickly identify grammatical errors in a story, or even auto-suggest phrases, AI still struggles to auto-generate acceptable stories. For example, in the journalism/news field, AI can easily generate sports recaps and stock news, but it would have difficulty writing this story. AI can be used to read product labels and extract/generate the product data from the visual image of a cereal box, however, it can’t yet generate the marketing copy that you would read in an Amazon product description page.

Now consider how much more difficult the robotics-based problem of generalized gripping is, and you can see why it is that OpenAI is abandoning (for the time being) the pursuit of AI-based, robotics modeling. This is not to say that research shouldn’t continue in this area, but it is conceding that the market isn’t mature enough yet for this to be viable (in OpenAI’s view).