So says the ad for Carl’s Jr. (promoting their chicken patty sandwich).

The robot in Carl’s Jr’s new ad is one of many ads and films which attempt to portray robots as symbols for the evil, giant, alien machines that apply crumbs and other not-nice stuff to chicken patties, hot dogs, tortillas and other food, beverage and candy items before they’re packaged and shipped.

Along the same theme, Stephen Colbert did a schtick about Robo-Slackers—“the #1 threat to America” — saying:

They ‘ve already taken away our factory jobs; now they’re after our stoner, burnout jobs! 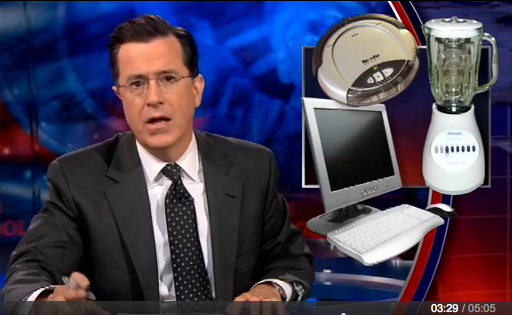 Nevertheless, and humor aside, robots ARE involved in food processing and packaging and it’s beneficial to almost everyone. Food quality, safety, labor costs, sanitation, product waste, and productivity (often in uncomfortably cold work areas) are the drivers. KUKA, ABB, FANUC, Adept and a fleet of integrators are the providers. Working together, they are enabling large food and beverage processors to better handle their hot dogs, baked goods, meat and poultry products and candy. It’s one of the rising areas of robotics, partly because the robots are much faster than humans doing the same task. In fact the robot manufacturers are pushing the technology as a means of eliminating the need for human contact with food products since workers are a major source of contamination in food factories.

Almost every aspect of food processing is a prospective area for robotics integration. Sorting and packaging lettuce in Spain; milking cows; in cheese production they stir curds, transfer cheese moulds, and turn, cut, portion, package and palletize; selecting, stacking and packaging sausages or hot dogs or candy; etc. In use in the EU and Japan, and seeking approval in the US, Japanese-made robot deboning machines are working in refrigerated rooms deboning chicken legs and ham thighs three times faster than the fastest butcher.