CES 2012 was a mammoth display of the trend toward smart, connected devices for every form of consumer activity: toys, appliances, entertainment, health, mobility, etc. More than 20,000 new products were launched at this year’s CES and a large portion of them could be considered “smart.”

“Smart” (robotic-like) products profess to add value, assure safety, and provide convenience through connectivity… claims that in many cases are true, particularly with in-car infotainment systems.

3,100 exhibitors, 1.86 million sq ft of exhibition space, 153,000 attendees of which 34,000 were international and only one good food stand (Nathan’s hot dogs – you can’t ruin a Nathan’s hot dog). Massive crowding, slow moving, loud, extravagant and wonderful. Thin TVs – so thin they looked like they couldn’t stand up by themselves without bending – 3D with and without glasses, projectors, smart appliances, and apps for everything from TVs to refrigerators to scales.

Consumer robotics represented a very small part of CES but had the same combination of glitz, glamour, marvelous stuff, misrepresentation, uninspiring products and hidden gems, just like the rest of CES. Robotics Trends hosted a Robotics Tech Zone but the action was well beyond their purview because many of the companies wanted to emphasize their consumer orientation instead of highlighting the robotic.

One of the most interesting areas was focused on Digital Health – where one could easily see benefits from sensors and smart apps providing data for the cloud to process and selectively inform doctors or users of the results, and progress over time. The highlight of the area was Life Technologies $150,000 Ion Proton Genetic Sequencer, which, by the end of the year, will be able to sequence an entire human genome for about $1,000 in a few hours. Digital Health was also the only area where research was shown and where the NSF/Carnegie Mellon University Quality of Life Technology booth was located, an area packed with healthcare inventions and eager young inventors. Few fell under the robotics umbrella (most were digital apps and devices) except these three: 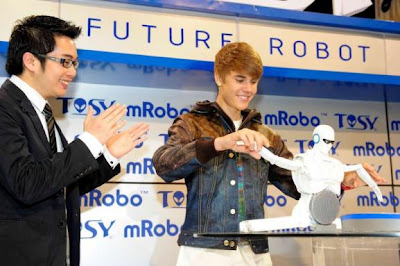 Certainly the most publicity went to Tosy Robotics, a Vietnamese manufacturer of robotic and high-tech toys, for the launch of  their new mRobo, a transformer-type boom-box entertainment robot with a two-hour meet-and-greet by teen heartthrob Justin Bieber.

Tosy also showed their other robotic toys: DiscoRobo, a dance to the beat with lights toy, and Sket-Robo, a robot that draws. 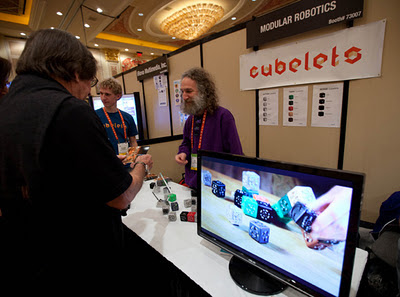 Cubelets, $160, by Modular Robotics, had a small booth and a big hit for their educational robot construction kit. These magnetic blocks can be snapped together to make an endless variety of robots with no programming and no wires. Since each cube has unique functions, you can build robots that drive around on a tabletop and respond to light, sound and temperature. 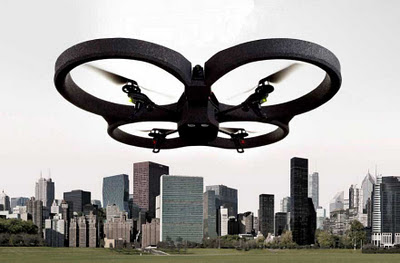 Parrot, a French manufacturer of hands-free wireless devices for cars and phones, was the hit of CES 2010 with their AR.Drone, a quadcopter with two cameras that is driven from an iPhone or iTouch. This year they upgraded the camera to enable hi-def video, improved their software for still and video capture, and added a range of games and customization accessories… all shown at a huge outdoor booth at CES. 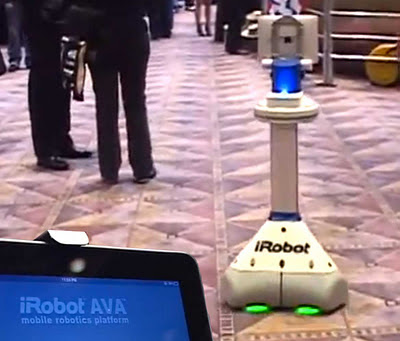 iRobot launched their Roomba, Scooba, Verro and Looj vacuums, floor washers, pool cleaners and gutter cleaning robots at previous CES’s, but at this CES they only had office visits for demos and marketing where they were also showing off their AVA concept robot and promoting their partnership with InTouch Health, a provider of telepresence collaboration for doctors, nurses, paramedics and patients and a place where iRobot’s lower cost AVA robots could be armed with InTouch Health’s hospital experiences and enable the resulting systems to be available to a larger audience.

More than 7 million robot vacuum cleaners have been sold thus far with real competition for iRobot showing up recently with a flurry of similar cleaners – all displayed at CES: 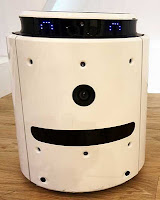 But LG and Samsung entered the arena, and, with their large consumer client base, vast manufacturing and marketing resources, and an array of add-on features, has been selling their vacuums in Asia and Europe; not yet in the US. iRobot should feel their presence very soon.

Another consumer products manufacturer (of home theater systems), South Korean Moneual, also sells a robot vacuum and a more interesting $1,000 home mobile air filter / security device. The mobile air filter is also designed as a safety system for the elderly, it connects with a wrist band that can detect a fall and can call for help if one occurs.

Pleo, the baby robotic dinosaur, was represented by both the seller (Innvo Labs) and the manufacturer (Jetta Co. Ltd.) that reincarnated the old bankrupt company, and was showing the new Pleo rb (reborn), with accessories and software enhancements.

Amongst the pseudo robotic products were three which act as a pedestal for the camera and video functions of iPhones and swivel or have wheels or tracks to move as wirelessly directed: 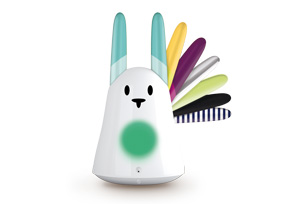 Karotz, by Violet (a subsidiary of Aldebaran, the builder of the Nao robot), announced the launch of their Karotz “intelligent internet companion” into the U.S. market with a $99 special price for the rabbit and 30% off all accessories. Ideal for learning how to develop apps with voice recognition and Internet connectivity, and now with Aldebaran stewardship, this interesting little device may hold a key to the future of human-robot communication.

Other vendors under the robotic umbrella included:

Not exactly robotic, but for prototyping and DIY’ers, there were three 3D printers of note: Makerbot announced their new $1,750 two-color 3D printer, Essential Dynamics showed their $3,000 Imagine Printer that prints with a whole host of materials, including food, chocolates, silicone, cheese, epoxy, organics, etc., and the Cube from Cubify which offers both a $1,300 3D printer and also a service for those that just want to send their designs in and get back the finished product.

So there you have it — 25+ robot vendors focused on consumer products — less than 1% of CES — and perhaps only one or two to rave about. Maybe next year….