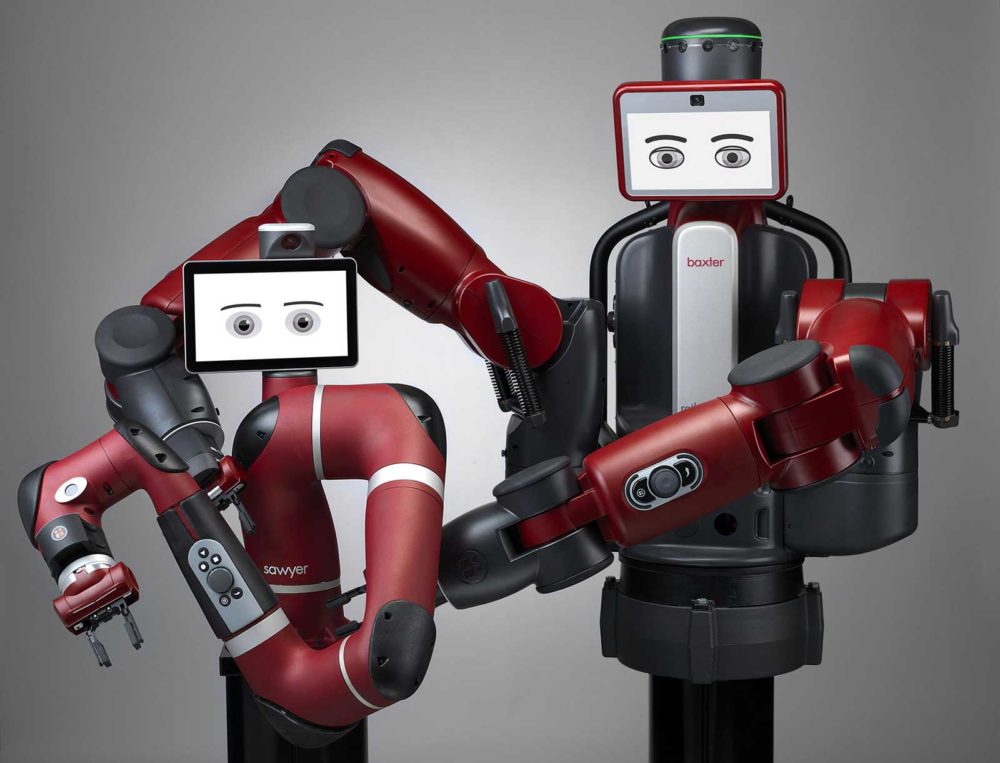 2018 was quite an eventful year for the robotics industry. It was full of ups and downs, of course, but it will unfortunately be remembered more for the downs than anything. So before we turn our attention to 2019 trends to watch, let’s recap the major robotics stories of 2018. Make sure to also check out our recap of the 10 most funded robotics companies of 2018.

What will you remember most from this year? Leave your thoughts in the comments. In no particular order, here are The Robot Report‘s picks for the 10 biggest robotics stories of 2018.

No question the biggest story of 2018 was Rethink Robotics shutting down on October 3. Rethink was founded in 2008 and raised nearly $150 million. Rethink’s robots used series elastic actuators (SEAs), which according to multiple sources, created substantial flexibility in the joints of the robots. That is good for safety, but bad for precision and motion performance. By using SEAs, Rethink compromised accuracy and repeatability for safety. Read The Robot Report‘s analysis of what went wrong at Rethink Robotics.

At the last minute, a deal to have Rethink acquired fell through. The company was short on cash as its sales failed to meet expectations. But on Oct. 25, however, German automation specialist HAHN Group acquired Rethink’s IP to further develop the technology.

Formerly known as Heartland Robotics, the company was a cobot pioneer with some of the first products on the market. The two-armed Baxter, introduced in 2012, and one-armed Sawyer, introduced in 2015, were known for their animated faces, red exteriors, and ease of programming.

Unfortunately, Rethink Robotics was not the only company lost in 2018. Two social robotics companies, Jibo and Mayfield Robotics, also closed this year, causing many to reconsider the viability of social robots for the home in the near future.

Bosch-backed Mayfield Robotics, maker of the Kuri robot, ceased operations on October 31. The company said it had been searching for external partners to continue forward since late 2017, but it was “unable to reach an agreement with any of the many dozens of companies we talked to.”

Jibo actually sold thousands of social robots, but Jibo’s struggles were no secret, and the company sold its IP to an investment management firm. Nobody really knows what will happen to the Jibo robots out in the world, but whatever functionality the robots have left will likely eventually wind down.

2018 was a sad ending for two social robots that, at one point, each showed some potential. But due to business and technical challenges, and less expensive and more capable smart assistants such as Amazon Echo and Google Home, Jibo and Mayfield Robotics did not have a path forward.

As it always has, Waltham, Mass.-based Boston Dynamics wowed the world in 2018 with its robots. Whether it was Atlas doing parkour, performing back-flips or going for a jog, or SpotMini opening doors, Marc Raibert and company once again showed off their engineer prowess.

But the big story from Boston Dynamics came during Raibert’s keynote at the Robotics Summit & Showcase, which is produced by The Robot Report and WTWH Media. Raibert announced plans to commercialize SpotMini in 2019. This is significant because it is the first robot Boston Dynamics will commercialize in its 26-year history.

Boston Dynamics is working with contract manufacturers to build 100 SpotMinis over the next year. It hopes to build 1,000 each year going forward. We have already seen a glimpse of SpotMini inspecting construction sites in Japan, giving a little insight into potential real-world applications. 2019 is going to be an important year for Boston Dynamics and, thus, legged robotics in general.

As a result of the crash, Uber was banned from further autonomous vehicle testing in Arizona, it laid off hundreds of safety drivers in Arizona and Pittsburgh and considered scrapping its self-driving car program altogether, which it later did to its self-driving truck division. In mid-December, nearly 9 months after the fatal accident, Uber resumed testing its self-driving cars on public roads in Pittsburgh. The watered-down testing is limited to two vehicles, which cannot exceed 25 MPH and must have two safety drivers at all times, and the testing is confined to a one-mile, geo-fenced loop near Uber’s Advanced Technologies Group headquarters.

As one reader put it to me, “when we look at autonomous driving, which seems to be the longest-running hype story in robotics (not a bad thing!), recent events are forcing a bit more reality into the narrative.”

Waymo, the self-driving car offshoot of Alphabet, has been testing self-driving cars in Arizona for some time. But in early December it launched Waymo One, the nation’s first commercial self-driving taxi service, in Chandler, Ariz. Waymo One currently is only available to a limited number of pre-approved passengers and, according to a report by Ars Technica, is very limited in where it can pickup and drop-off passengers.

Multiple reports say technical issues persist, including difficulties making left turns across lanes with fast-moving traffic and merging onto highways in heavy traffic. This is part of the reason Waymo One still has human safety drivers in its vans. Waymo is taking a super cautious approach to the roll-out, and rightfully so. Sure the technical issues are partly to blame, but so is Uber’s fatal accident. Waymo is by far the leading company working on self-driving cars, and if it caused a fatal accident this early on in development, that would be bad for Waymo and the market as a whole.

So Waymo One is not quite yet the commercial service the company said it would launch by the end of 2018. But, again, it is the nation’s first commercial self-driving taxi service. Let’s see what happens in 2019.

Microsoft is working with Open Robotics and the ROS Industrial Consortium (ROS-I) to bring the Robot Operating System (ROS) to Windows 10. The ROS community has built workarounds for Windows, but official support of ROS Melodic Morenia on Windows 10 is coming in 2019.

Microsoft was gung-ho about robotics under Bill Gates’ leadership in the early 2000s. Gates predicted in 2007 that robotics would be the next hot field. Unfortunately, Microsoft’s robotics wheels fell off after Gates left Microsoft in 2008.

Of course, Microsoft Robotics Developer Studio (MRDS) was released in 2006. It was a robotics development and software package. It was released about one year before Willow Garage announced ROS, but never gained traction. ROS for Windows is an opportunity for Microsoft to further expose its Azure cloud platform to the vast number of ROS developers worldwide.

As Sandy Agnos, Brain Corp.’s Director of Global Business Development, put it: “robotics and the cloud (RaaS) are like peanut butter and jelly.” The term “cloud robotics” was coined in 2010 by James Kuffner, but a couple tech giants are looking to officially put cloud robotics on the map.

Amazon and Google both announced – about one month apart from each other – cloud robotics platforms to give developers a centralized environment to build, test, and deploy robots. The Robot Report uncovered the Google Cloud Robotics Platform in October. Details for the platform, which will arrive in 2019, are scarce. Developers will have access to all of Google’s data management and AI capabilities, from Cloud Bigtable to Cloud AutoML, which at press time included beta versions of AutoML Translation, Natural Language, and Vision. Google says its “object intelligence service will provide low-latency object recognition and pose detection which can be used for grasping, automated inventory and more.” The Google Cloud Robotics Platform will also use Google Cartographer, which provides real-time simultaneous localization and mapping (SLAM) in 2D and 3D.

Amazon Web Services (AWS), the cloud computing arm of Amazon, released on a limited basis its RoboMaker cloud robotics platform. RoboMaker can be used to build robots, add intelligent functions, simulate and test robots in a variety of environments, and manage and update robot fleets. RoboMaker runs on top of ROS and extends the framework to AWS services for machine learning, monitoring, and analytics.

In another sign of the growing importance of cloud robotics, Fetch Robotics hired Tim Kimmet, former VP of Cloud Computing Platform at Walmart, as its VP of Engineering. Kimmet will lead Fetch’s hardware, software, and quality engineering teams, and scale Fetch’s Cloud Robotics Platform to support warehouse and logistics environments. Prior to Walmart, Kimmet was Chief Engineer at PayPal and eBay where he led both companies’ transformations to cloud-based architectures.

According to the International Federation of Robotics (IFR) World Robotics Report 2018, sales of industrial robots reached a record 380,550 units in 2017. That represents a 29 percent increase over the 294,300 units sold in 2016. Announced at Automatica 2018, the report said China experienced the most growth at 58 percent. Industrial robot sales in the USA increased 6 percent, while sales in Germany grew 8 percent compared to 2016.

Gudrun Litzenberger, General Secretary of the IFR and a 2018 Engelberger Award winner, said trends such as digitalization, robots that are easier to use, robots that learn from each other via the cloud, and improved human-robot collaboration will help continue the growth of worldwide sales.

OnRobot made a major splash in 2018 with its merger of US-based Perception Robotics, Hungary-based OptoForce, and Denmark-based OnRobot. The new OnRobot, which is being led by CEO Enrico Krog Iversen, the former Universal Robots CEO, has two goals: to provide everything that goes on a robot and be the world’s leading cobot end-of-arm tooling company.

In August, OnRobot acquired startup Purple Robotics, a robotic gripper startup founded in 2017 by three former Universal Robots (UR) employees with 18-plus years experience working on the UR3, UR5, and UR10 cobots. Iversend said at the time of the acquisition, “Purple Robotics will definitely not be our last acquisition. We have our eye on a number of other, interesting companies around the world.”

OnRobot is well-positioned to do new funding led by Summit Partners, with participation from existing investor The Danish Growth Fund. Keep an eye on OnRobot in 2019.

The rise of warehouse robots

Increasing e-commerce demand and labor shortages are putting tremendous pressure on the distribution industry. As such, the market represents a major opportunity for robotics – one study projects the market to surpass $20 billion by 2024. We saw many logistics automation companies thrive in 2018, and here are just a few examples.

In March, Chinese mobile robot maker Geek+ made its debut in the United States at MODEX, which is the largest supply chain trade show in the Americas. Geek+ went on to raise $150 million in November with the hopes of growing the business by “more than five times” going forward.

GreyOrange, a Singapore-based company, opened a US headquarters and raised $140 million to expand operations across Asia, Europe and the US. JD.com, the Chinese equivalent of Amazon and China’s second-largest e-commerce provider, raised $550 million from Google.

As you can see, US-based logistics automation companies are facing increasing international competition. But many US-based companies thrived in 2018, too. RightHand Robotics, for example, raised $23 million and added Mick Mountz, founder of Kiva Systems, to its board of directors.