An Uber self-driving car operating in autonomous mode struck and killed a pedestrian last night in Tempe, Arizona. The news was first reported by ABC15.

The woman, 49-year-old Elaine Herzberg, was taken to the hospital where she died from her injuries. Herzberg was pushing her bicycle across the street and wasn’t using a crosswalk, police said.

The police also confirmed the Uber self-driving car, a Volvo XC90 SUV, had a human safety operator behind the wheel. There were no other passengers in the car, according to Uber. The police said the preliminary investigation showed the self-driving cars was traveling at about 40 MPH and did not show significant signs of slowing down. 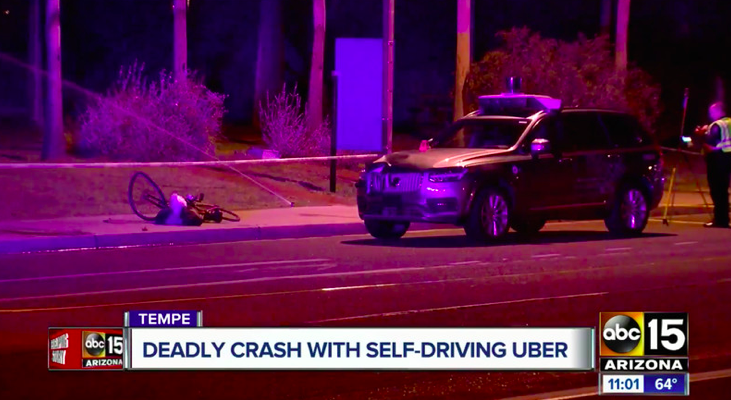 This story is developing, and there will be lots of speculation about what happened. But remember, the Uber self-driving car likely has an extremely detailed recording of the incident. So we should know exactly what happened, eventually.

Update on Tuesday, March 20: Tempe police chief Sylvia Moir, according to the San Francisco Chronicle, said the accident might have been unavoidable. [From viewing the videos,] “it’s very clear it would have been difficult to avoid this collision in any kind of mode (autonomous or human-driven) based on how she came from the shadows right into the roadway,” Moir said.

As a result of the fatal accident, Uber self-driving car tests have been paused in Phoenix, Pittsburgh, San Francisco and Toronto. “Some incredibly sad news out of Arizona,” Uber CEO Dara Khosrowshahi tweeted. “We’re thinking of the victim’s family as we work with local law enforcement to understand what happened.”

This appears to be the first time a self-driving car has killed a pedestrian. But it’s not the first time a self-driving car has been involved in a fatal accident. In 2016, a driver was killed when his Tesla, while driving in Autopilot mode, crashed into a truck. It was a major controversy that, effectively, ended Tesla’s relationship with Mobileye, which helped build part of Tesla’s semi-autonomous system.

According to the National Highway Traffic Safety Administration, about 37,000 people were killed in traffic accidents in 2016. That was up 6 percent from 2015.

An Uber self-driving car was involved in another crash a year ago in Tempe. Uber’s Volvo XC90 SUV rolled onto its side (see picture below) after a driver of another car failed to yield. Uber’s car was also in autonomous mode at the time, but it wasn’t at fault, according to police. Uber began testing self-driving cars in Tempe in February 2017. The fleet of self-driving Volvos arrived in Arizona after they were banned from California roads over safety concerns. Gov. Doug Ducey touted Arizona as a testing ground, saying at the time “Arizona welcomes Uber self-driving cars with open arms and wide open roads.”

The US National Highway Traffic Safety Administration and the National Transportation Safety Board said they were sending teams to Tempe. And others are expressing concern.

“There should be a national moratorium on all robot car testing on public roads until the complete details of this tragedy are made public and are analyzed by outside experts so we understand what went so terribly wrong,” said John Simpson, privacy and technology project director at Consumer Watchdog. “Arizona has been the wild west of robot car testing with virtually no regulations in place. That’s why Uber and Waymo test there. When there’s no sheriff in town, people get killed.”

Anthony Foxx, who served as US Secretary of Transportation under former President Barack Obama, called the accident a “wake up call to the entire [autonomous vehicle] industry and government to put a high priority on safety.”

Uber started testing driverless cars in Pittsburgh in 2016. The ride-hailing firm has also been testing driverless cars in San Francisco, Pittsburgh, Toronto and the Phoenix area, which includes Tempe.
The death comes a year after Uber took its self-driving cars off the road following an accident that left a Volvo SUV on its side in Arizona. The programme was later reinstated.

Here is my statement regarding the tragic event that occurred in Tempe overnight. pic.twitter.com/3ql1WAxKpA