Will big industrial robot makers such as ABB, Fanuc and Kuka, transition and begin making products for the consumer and service markets? I’m beginning to think not. And here are a few of my reasons: 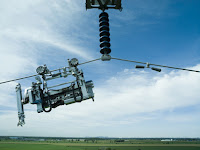 I’ve been impressed by the possibilities for power companies to reduce costs and expand safety and efficiency by adapting robots for high voltage transmission line maintenance and inspection instead of their present methods. Consequently, I researched and found some interesting Japanese and Canadian robotic solutions – and also an American one scheduled to debut in 2014 – and suggested these three options to the companies that presently perform line inspection and maintenance.  I commented that this was the wave of the future and asked them whether they were going to use them. There was little, if any interest in doing so.

This lack of interest is not unique to the power industry.  When I talked with the big industrial robotic vendors I received the same message when I asked about the possibilities of their producing social and work-place-assistant robots or using open or non-proprietary operating systems and even using non-proprietary devices like an iPad or tablet for programming and training.

The resistance is on many levels: job protection, revenue protection, technology and systems protection, and product protection.  Notice the “protection” in each phrase? That’s the main problem. 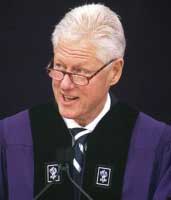 Bill Clinton, in a recent commencement speech at NYU, said that in the last 30 years companies have come to believe that they have obligations only to their shareholders.

The problem is that if you do that you ignore the other stakeholders.

In thinking about what he said and what I heard from the robot executives in relation to using robots instead of humans or helicopters to maintain and inspect power transmission lines I realized that protection and lack of vision is endemic. When helicopters are used, companies that perform the service charge seven times the estimated cost of using a robot. Thus the profits derived are seriously more than would be derived from using a robot. Said another way, the profits from the sale of just one PacBot system is equal to the profits from the sale of 500 Roombas.

Protective and narrow thinking – as was expressed to me in many forms by the current vendors – is what will prohibit these vendors from transitioning into the different world of consumer/service robotics. That kind of thinking stultifies innovation and thwarts the goals of the corporation to all their stakeholders.

Consumer sales are whimsical, dependent on many variables.  Manufacturing and selling 500 or 5,000 or 5 million consumer products is an entirely different process than selling a single defense contract which rarely if ever ramps up into numbers over 100.

Further, defense, space and security robotics are mostly in the domain of large aerospace companies or spinoff startup companies from university research centers and derive their profits as a fixed percentage of their costs and overhead… a formula that doesn’t translate into the commercial sector.

Finally, most service robots involve interactions with humans in human/robot roles entirely different than in a factory setting.

Therefore, I believe that disruptive startup companies will spin out of research facilities and throughout the world of inventors and venture capitalists and provide product solutions to consumer needs that they want to purchase. Further, I believe that the business model for these new companies is entirely different than the model for old-line robotic manufacturers and also the aerospace industry. Consequently, this will be a worldwide phenomena. With my US hat on, it means that the US has a fresh start at an industry that is soon to emerge: small business and personal service robots and vehicles.