Michael Perry, vice president of business development at Boston Dynamics, told The Robot Report that Spot 2.0 fulfills the vision of being a developer platform. Many of the key requests from Spot’s early adopters have been baked into the new release, making it easier to prototype application behaviors, he said.

Perry said the big story revolves around autonomy and mobility. He said the first version of Spot was a minimally viable product to demonstrate that the robot could do autonomous behavior. But it had its limits.

“If you went around a site to one location near the end of the loop, Spot would have to walk the entire path to get to that point,” he said. “With Spot 2.0, you can program the robot to go to that point, but it’ll find the shortest path to get there and perform its action.”

The map for Spot 2.0 must still be created manually, but the robot acts more autonomously once it has the details of its work environment. “This is important for customers who don’t want Spot to take the same route over and over again or for Spot to find the shortest path in an emergency,” said Perry. “If a gauge goes off, for example, Spot can more quickly get there and take a picture of the gauge to figure out what’s going on.” Stairs are challenging for all types of legged robots. Perry said Boston Dynamics has in the past demonstrated advanced behaviors for walking up stairs, but those features weren’t fully baked into the software. That is no longer the case, as Spot 2.0 can identify stairs.

The industrial sites Spot is working in often have concrete floors covered in dust. This slippery surface is a great way for people to slip, not just robots. Perry said it is critical that Spot is reliable for its industrial customers.

You might remember the 2010 video above that shows BigDog slipping on ice. The robot certainly wasn’t graceful, flailing its legs all over the place as it tried to maintain its balance. Boston Dynamics doesn’t want Spot to react the same way, so its force sensors have been tweaked. The robot will know if it’s slipping and change its gait to slip more gently.

“Spot takes more measured steps to remain upright and continue walking,” Perry said. “If it does anticipate that it’ll fall over, it doesn’t shoot the legs all over the place. It goes into a locked state, the legs stay in place, and it falls over.”

Payloads can use Spot API

Another enhancement is that payloads can now use the Spot API to automatically inform the robot about its physical properties and the services hosted onboard. Previously, if you mounted an external payload to Spot, you had to go into the software and configure the robot to expect a certain amount of payload on a location of Spot’s body.

“Now you add a line of code and tell the robot about those characteristics,” Perry said. “Spot then figures out how to shift its weight around. This is important for swapping payloads in the field and rapid iteration.” Despite the COVID-19 pandemic, Perry said April was the best month to date for getting Spot out the door. There are now 60-plus members of Spot’s early adopters program and 120-plus Spot robots out working in the world.

“Interest is ramping up with what you can do with the robot,” he said. Boston Dynamics launched an applications section on its website to highlight how Spot is being used in a variety of industries.

Perry said 35 Spot robots have been sent home with the software team for continued testing. “It’s portable enough to take home, unlike Atlas, which at almost 200 pounds and with hydraulics is difficult to carry,” he said.

Does Boston Dynamics send Spot home (free of charge) with robotics journalists? Asking for a friend. 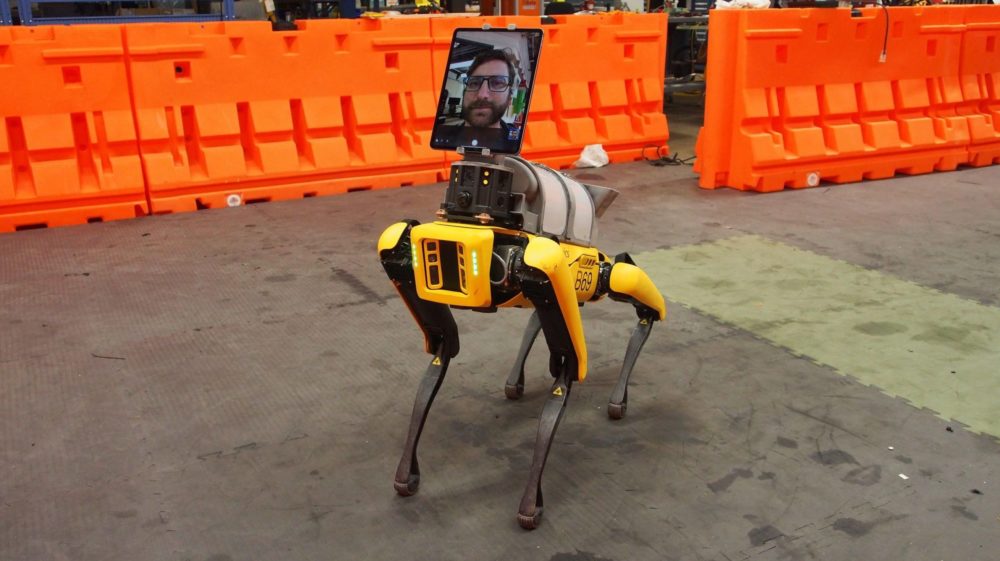