As businesses around the world get ready to reopen after novel coronavirus closures, many are looking to autonomous cleaning and disinfection. Unmanned aerial vehicles have several potential uses for public health, but using disinfection drones for large public spaces is not yet feasible, found a recent study by Exyn Technologies Inc.

Philadelphia-based Exyn Technologies was spun out of the University of Pennsylvania in 2014 and has developed a full stack of systems for mapping and inspection in GPS-denied environments. Its autonomous robots serve construction, logistics, military, and mining applications. The company received $16 million in Series A funding in July 2019, and it has participated in the Prospect Mining Studio, the SXSW Innovation Awards, and PwC mining and aerospace recognition.

Interest in robots and drones for logistics and cleaning has risen sharply as policymakers and organizations weigh the ongoing costs of COVID-19 shutdowns and the health of employees and customers. Hospitals have deployed disinfection robots using UV-C light or chemical sprays, and larger venues have expressed interest in using disinfection drones.

“With all the interest in drone autonomy, we wanted to see if there’s an opportunity for the technology to be useful for applications to support COVID-19 response,” said Nick Lynch, senior robotics engineer at Exyn Technologies. “One area we gravitated to was deployment of UV lights, which are a relatively lightweight technology with a decent coverage area.”

“Our initial questions were: Can we mount the payload, how much exposure of UV light is needed to achieve sanitation, how close do we need to fly, and what is the power draw?” he told The Robot Report. “The danger of radiation exposure to people is one reason why robots and drones are useful.”

Exyn contracted with Crystal IS for UV-C lights for the test disinfection drones. “Crystal IS makes a line of UV LEDs and engineering development kits,” Lynch said. “We consulted with their engineers on weight and power draw, and we worked to do simulations on exposure times and distance.”

“We could also determine directionality — directing light away from the platform itself, to avoid the effects of UV light on the drone’s components,” he explained. “A key consideration was how effective incident irradiation was on the surfaces. We found it was most potent when perpendicular, or downward-facing, so we incorporated that into the design of the payload.”

“Once we had the models in hand, we could use them to design and mount the modules,” said Lynch. “We could do ground tests of sanitation performance at different distances and areas.” 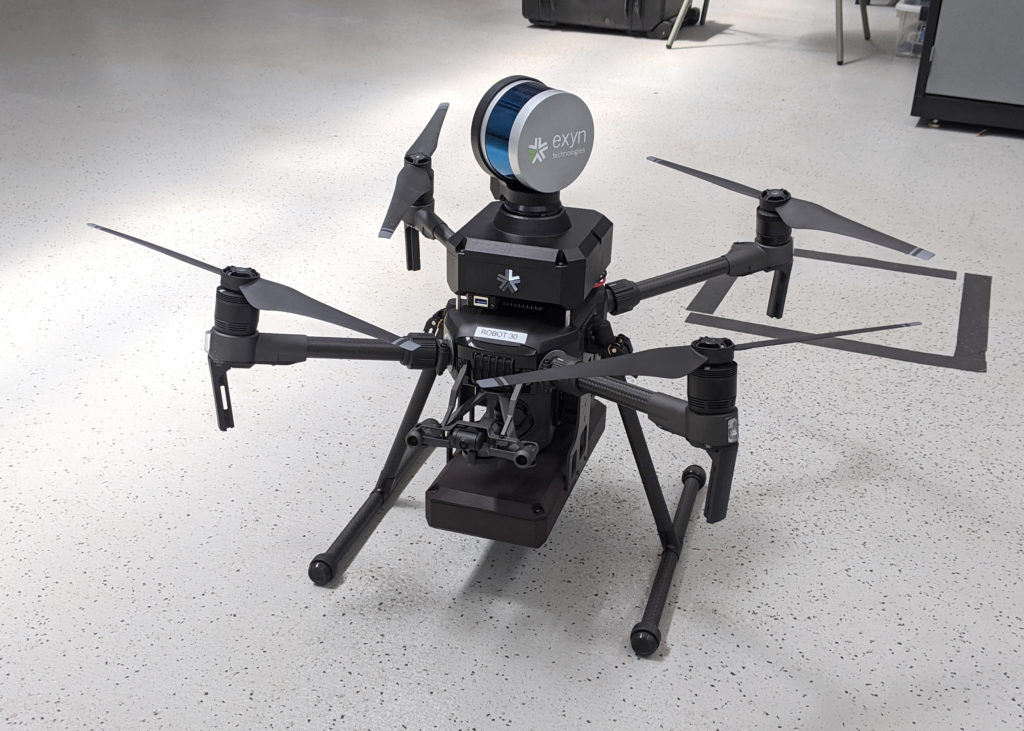 Regulations and benchmarks for disinfection drones

“We’ve designed our robots for operations in unknown environments without infrastructure,” he said. “We could give it some boundaries — a hospital room or wing or [a surgical or operating] theater. The disinfection drone would establish its own path and optimal trajectory.”

“While FAA-regulated space does not include indoors, we would still adhere to company safety policies,” Elm added. “A lot of enterprises are more flexible about closing off spaces and allowing robots to operate alone or remotely. We saw a pathway to allowing these robots to fly. Our vision was around larger spaces like movie theaters, which have odd geometries and couldn’t use ground robots.”

“It’s a matter of targeting use cases,” he said. “We wanted to be mindful of ground-based alternatives and be able to sanitize certain environments with a high risk of infection where our technology could navigate and be useful. There aren’t yet benchmarks for disinfection drones and robots.”

The research team used UAVs to shine an ultraviolet light at a distance of 1 meter for an exposure time of 1 minute. It found that a disinfection drone could effectively sanitize a 0.25-sq.-m (0.8-sq.-ft.) space.

“In these types of tests, we typically use UV test strips as an indication of germicidal performance as opposed to more laboratory-focused methods like taking cultures or using biological indicators,” Lynch said. “At a 1-meter range, we found a balance between where we could see the best irradiation performance and what is a safe standoff distance to fly the drone.”

However, disinfection drones would take longer to disinfect a room than existing wheeled robots. “With only 15 to 20 minutes of light time, that’s a relatively small office or room,” said Lynch. “That’s short of the large-scale application we had originally envisioned.”

“The time and power required to ensure mission completion would not be an efficient solution to sanitize large areas at this time,” said Exyn’s report. “To be an effective solution for large areas, further advancement is needed in the underlying UV-C LED technology so that effective sanitization could be achieved on the order of seconds rather than minutes.”

“There is room for improvement in the next couple of years,” said Lynch. “There is the possibility of gains in efficiency or longer flight times.”

“Higher irradiation intensity over a larger coverage area is needed to sanitize large surfaces at a distance, and the power draw would be too large for conventional aerial robots,” said Exyn’s study. “The UV-C payload may be more suitable for ground robotics applications, like UVD Robot’s drone for hospital rooms, or fixed installations, like a luggage carousel or packaging line.”

“We’ve seen other drones used to remotely monitor people’s temperatures, track people, or enforce social distancing,” said Elm. “We leaned into UV sanitation because of the unique capabilities we have to offer. We’re comfortable with the autonomy of our systems, but we need more powerful UV to be scalable in large environments.”

What about using disinfection drones to spray chemicals? “Some studies have said that UV has some effect on [pathogens] in the air,” acknowledged Lynch. “However, there’s a question of how a drone’s rotors might circulate air and cause further dispersion. There’s a need for further research on the aerodynamic effects on bacteria and particles from propellor turbulence.”

Exyn Technologies shared its findings as a public service and is continuing work on other applications besides disinfection drones.

“We continue to explore ways to attack COVID-19, and we invite folks to share other ideas,” said Elm. “We want to help drive development and thinking about robots and payloads. There’s a great opportunity for robotics to relieve certain risks.”

“We’re working on several partnerships for interesting technologies, such as for sensors or for unique and proprietary data sets,” he said. “We’re delighted to see customer interest remain strong and growing.”

“This could also apply to carrying different kinds of sensors for mapping, not a warehouse’s geometry, but its inventory for workflow, cycle counting, and heat maps,” he said. “This could help reduce overstock and costs from inefficiencies in large-scale operations.”

“There’s an opportunity, not just for incremental improvement, but also for transformation,” Elm said. “Drone mapping in mining can drive efficiency, as well as save lives by reducing the need for people underground. We want to see a similar impact in other industries.”