“Our investors have all bought into the robot venture factory strategy,” said Claus Risager, CEO of Blue Ocean Robotics. “They understand why it’s good to invest in robotics and business development and then sell them off. We can reuse some technology and how the business is structured from one robot to another.”

Late last month, Blue Ocean Robotics received close to $20 million (U.S.). The company had raised $12 million in December 2019, before the novel coronavirus crisis spread. Most of the investors in Blue Ocean’s latest round were familiar with its transition from an integrator to a venture factory, Risager told The Robot Report. 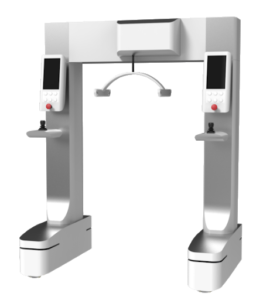 “Blue Ocean has a strong group of investors behind us, including some of the richest persons in Denmark. We’re not publicly traded, and we want to promote progress on our robots rather than speculation,” he said. “Our venture factory will use the capital to get our PTR patient-lifting robots and GoBe telepresence robots ready for market and build up production and sales offices worldwide.”

“With a robotics-as-a-service or RaaS model, it’s good for customers, who can move to operational expenditures, but very capital-intensive for us to set up,” said Risager. “We have about 220 employees today. It will take a long time to get costs back, but we believe the time is right for RaaS.”

“The advantage of our venture factory model is that we already have relationships and contracts with distributors,” he said. “For our robots such as the PTR, which is designed for both safe patient transfer and rehabilitation, we can reuse technical expertise from our UVD disinfection robots.”

Not only has the ongoing pandemic sharply increased demand for disinfection robots such as those from venture factory unit UVD Robots ApS, but it has also posed production and supply chain challenges, acknowledged Risager. “Denmark has reopened gradually since June,” he said.

“Our UVD robots were among the first ones out, and since 2014, we have added tons of software to fit with the daily workflows of hospitals,” said Risager. “We are at least three to five years ahead of competitors because of our accumulated experience. They have working on their robots for the past six or seven months, and in many cases, they have just put UV lights on an autonomous mobile robot [AMR] without knowing how to point them. That’s where we were back in 2015.”

“Some of our Asian competitors don’t know the industry or even use toxic gases,” he added. “You then have to seal off the patient room and wait. Our robots have safety sensors that will shut them down if someone crosses a perimeter or if they detect people. We think our four safety systems running at the same time differentiate us.”

“At the same time, one of our larger orders of between 100 and 200 robots would not have come to us without someone copying us,” Risager noted. “We were the first Danish company to go for the professional service robot market, where there is more innovation from Asia than in the U.S. or the rest of Europe, which have mainly focused on industrial automation.”

“We have had many hundreds percent growth in sales and are in 70 countries,” Risager claimed. “We expect the inflow of customers to continue, and we have plans for more robots. We need the international market to get positive cash flow.”

What are the differences among different global markets? “Asia is good, but there are significant differences between one country and another’s willingness to invest,” replied Risager. “We have large customers in Europe, but each country wants local references. We were a little bit late to get into the U.S., but we now have many installations. The U.S. is the biggest growth area for us.”

“Our venture factory can now also claim to be CO2-friendly, because one large Danish industrial firm with factories all over the world has deployed 50 robots,” said Risager. “They use them to save transport time and air travel, as we can provide both disinfection and telepresence functions. The robots are involved in a safety inspection tour, and then the company engages local people on the production line.”

“The Danish robotics community works together on joint marketing, and we are a part of Odense Robotics,” he said. “Our universities probably educate 100 robotics engineers a year, and we actually hire 500 a year in the city of Odense, which has worked to attract families from around the world to come and stay. We have close to 30 nationalities at Blue Ocean.” Although Blue Ocean Robotics had announced its acquisition of Suitable Technologies Inc. last year, the transaction was delayed by court disputes between founder Scott Hassan and his ex-wife Allison Huynh. She and former shareholders claimed that Suitable’s assets were undervalued.

“The judge in Delaware expressed a concern that Suitable Technologies had not documented enough that they had talked to several different companies about being acquired,” Risager said. “We were the only ones left, it seemed, and the judge did not find the process of how that happened sufficiently documented.”

The telepresence company was eventually handled as a bankruptcy case, and Blue Ocean was the winning bidder at an auction of its remaining assets.

“The Beam robots are 10 years old and have reached their end of life,” said Risager. “But we were interested, even though it was problematic, because we have hundreds of customers with thousands of installations. Because we can no longer order parts, we have had to take apart some Beams to keep that customer base alive by using parts for repairs and maintenance purposes.”

“We will continue servicing them, but since the beginning of last year, our venture factory has developed the GoBe from scratch with the newest hardware and software and based on our experience with the UVD and other robots,” he said.

“Service robots require innovation and the right price, and the market will be extremely big at some point,” said Risager. “Humanoid robots are 20 years out, but on the way, we will find many specialized applications and ways to make money.”