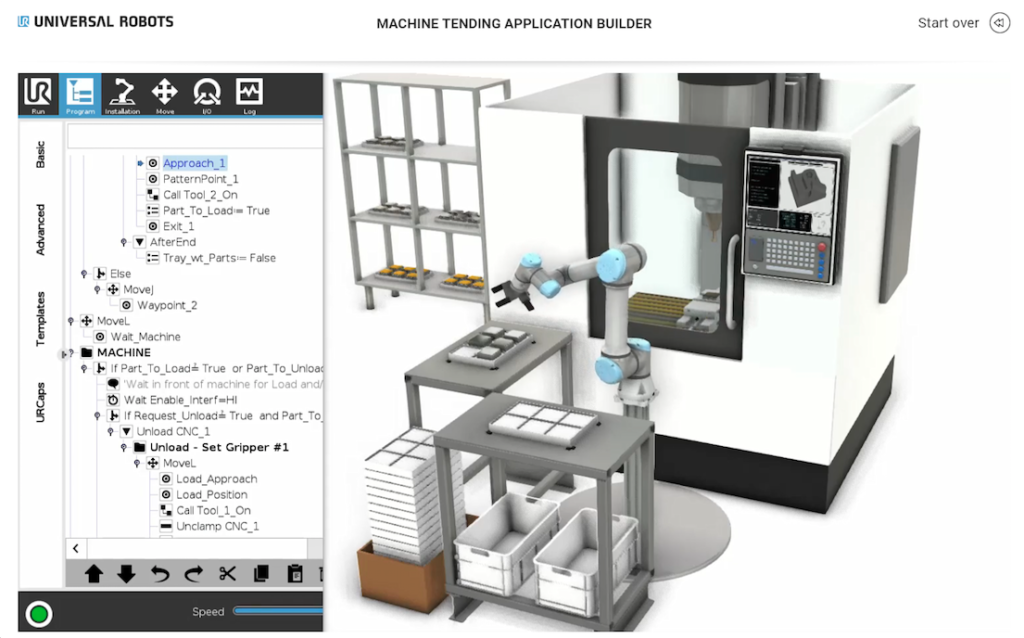 Application Builder walks users through the entire process of building a UR robot application. The online configuration tool provides a step-by-step process to choose the right robot and end-of-arm tooling, to walk through the pros and cons of different configuration options, and to learn the skills required to complete a full solution.

Three cobot applications are available at the launch of UR’s Application Builder: machine tending, assembly, and packaging. Application Builder provides a complete program template for the specific application; users are walked through configuration questions to help define the most appropriate end effector for cost and throughput requirements.

Users are also shown how to interface the robot controller with other equipment, and how to program the robot for specific application requirements such as torque for screw-driving applications or pattern setups for pallet stacking. Additional applications are also in the works.

For UR President Jürgen Von Hollen, the new Application Builder is just one example of the company’s overall core principle: simplicity.

“With the application configurator, we are taking a complex idea and saying, ‘what do I actually need, how do I configure the actual application.’ We see our role at Universal Robots as taking the complex automation and robotics that have previously made people say, ‘wow, it’s only for the large companies, we need an automation engineer,’  and telling them ‘no, no, you don’t have to do that.’ We make it easy. We call it a  Do-it-Yourself kind of philosophy.” Von Hollen explained that UR products are just as at home in smaller to medium-sized operations as they are with larger companies.

He continues, “small to medium-sized groups typically have low volumes, but high product mix. They’re doing five or six product changes a day, right, and they’re making 100 of these, 60 of these, 2,000 of those and that has been very, very difficult to automate in the past. That’s where our focus has been, and as we start growing, it’s been about trying to get that message out there.”

UR used a VR headset so IMTS attendees could enter into a virtual world of a working robot application. “Application Builder gives anyone the tools and skills they need to quickly configure and deploy a successful robot application with complete confidence that it will satisfy their requirements,” says Stefan Stubgaard, Head of UR’s Global Competence Center.