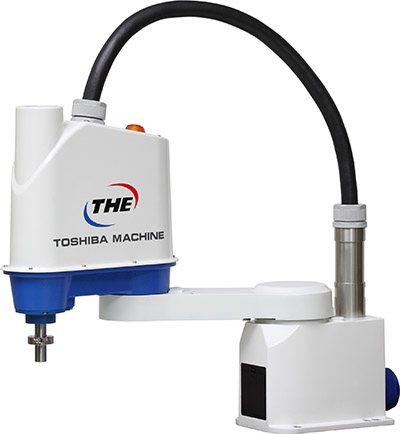 TM Robotics is preparing to introduce the THE400 SCARA robot, the latest addition to its range of industrial machinery. The new model has been developed to set the standard for the next generation of SCARA robots, and will be officially launched by Toshiba Machine at the International Robotic Exhibition (IREX) in Tokyo, Japan, which runs from November 29 to December 2, 2017.

Combining high-speed operation and a high payload capacity, the new machine promises to deliver fast-cycle automation to meet the growing demand for speed in parts assembly, testing and transfer processes in the electronics and automotive manufacturing industries.

The robot is capable of operating speeds of 7000 mm per second, with cycle times hitting 0.3 seconds for a standard 2kg payload. The THE400 model can withstand a maximum payload of 5kg, with an allowable moment of inertia of 0.06 kgm².

Optional specifications for the robot include an ergonomic anti-dust design, a tool flange to attach a mounting hand, a bracket tailored to mount a vision camera and a robot-controller cable that has been designed to a customised length. Looking to the future, Toshiba Machine also plans to release a ceiling-mounted version of the design and a THE400 model specifically designed for cleanrooms.

“Manufacturers are looking for robots with improved precision, faster speed and enhanced performance — and the THE400 delivers this,” explained Nigel Smith, managing director of TM Robotics. “Toshiba Machine will launch the new model at Japan’s IREX 2017 and will showcase its capabilities by demonstrating the machine in action at the company’s stand. To see all these machines in action, visit booth number IR1-27 in east hall 1.”

The European launch of Toshiba Machine’s THE400 robot and the TVM vertical series will take place at Automatica in Munich, Germany in June 2018.