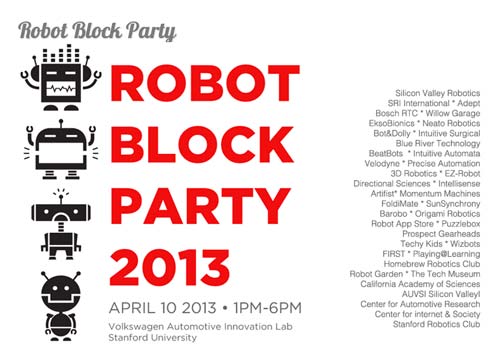 I’m always surprised when I come to Stanford. I find new companies setting up shop in the area. Ford’s new research lab wasn’t there the last time I drove by, for example.

Later, when walking around Palo Alto and in a restaurant I could hear snippets of conversation that were different than most other college towns. Bio med devices, hardware, software, VCs, appointments with funders, crowd funders, etc. nothing about love, philosophy, literature.

At the Robot Block Party held on the Stanford campus and part of National Robotics Week, everybody had a chance to see and talk with somebody about what they were seeing.

Instead of just seeing a Lidar spinning around on top of a car, at the block party you could walk around the back and see a sun-shaded monitor showing what the Lidar was seeing. And talk with an eager young salesperson about what you could do with the data.

Crowded with lots of kids, one booth stood out as a kid-pleaser. This year’s F.I.R.S.T. contest includes shooting frisbees into a raised box so nearby Sarasota high school team was there at the block party with their entry into the contest shooting off frisbees to clutches of happy kids trying to catch them.

Intuitive Surgical was showing the simplicity of their arm/wrist/fingers but also the amount of complex mechanics that make it work.

Bosch, although showing their new Indego robotic lawn mower, was really recruiting for all the different types of activities that Bosch Research is involved with.

And then there was a phd candidate telling about the progress he’s making with his VTOL quad copter/4-engined plane.

No refreshment stands or even bottled water — and it was hot (85)! But it was a beautiful day and the chatter from kids and adults was upbeat and appreciative for the event. As was I.