DEMO describes itself as the launchpad for emerging technology and trends. The DEMO Fall 2013 Conference was produced by IDG, the publishing giant of Computerworld, PC World, MacWorld, etc. I went to see the 40 start-ups presenting their new products and apps, searching for anything robotic, and interested in everything else that might be trendsetting. Videos of all 40 presentations can be seen here.

Erick Schonfeld, the Executive Producer of DEMO, prepped us that this DEMO show would reflect five big trends:
The format for DEMO was that each of the start-up companies would get four minutes to present and demonstrate their idea and outline their business plan. Start-up presentations were grouped by the five categories shown above. A panel of three experienced VCs (or previous start-up executives) knowledgeable about that category would critique and ask core questions.  Each presenter had a booth in an exhibition hall for further discussion and funding questions. In between these presentation sessions were “Founder School” and “Executive Briefs” sessions to share insights from successful start-ups from the past.
One of those Executive Briefs was particularly interesting to me because it emphasized the need to focus on the needs of the user rather than the brilliance of the product. Jody Holtzman, a spokesman for the AARP – that’s right, the Association of American Retired Persons – asked everyone: “What’s your 50+ strategy?” His point was simple: if you are in the consumer products business, what’s your strategy to address the 106 million Americans that spend over $7 trillion annually? He went on to offer a series of pdf and infographics that describe the needs of this large and growing population.

An example of the depth of thought in the AARP materials can be seen in the Diet & Nutrition section. Dietary tracking partnered with fitness measurement systems and healthy-eating grocery delivery services are one such suggestion. DEMO presenters nibbled at the edges of these AARP suggestions with apps like Pictrition, which attempts to gamify the process of losing weight. Pictricion “leverages the powerful mechanics of a food journal, but without having to tediously write down every detail of your diet. Just take pictures of the food you eat throughout the day and health conscious people like you will rate how healthy they think it is. Get more points for eating healthier food and compete with friends and family.” The app is predicated on research showing that the biggest and most sustained weight losses occur when patients journaled their daily intake.

Perhaps a more relevant DEMO presenter was Hello Doctor, an app created from personal need. It collects scanned images of medical reports of all types and parses for keywords and then tags and digitally files them. If you query HDL you get a chart of all lab reports by date each linked to the original report. It replaces the folders full of medical and insurance records that patients often clutch in waiting rooms and at home as they research their conditions online. 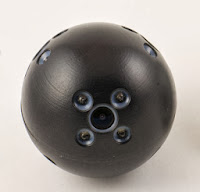 Bounce Imaging displayed a low-cost disposable throwable 360º camera with audio and sensing capability. Unlike Recon Robotics‘ Scout Throwbots which remotely-controlled-move once thrown into an area under surveillance, Bounce’s Explorer captures it’s images on the fly – in the air and on the ground. The Explorer has a shock-absorbing shell embedded with six cameras, plus clusters of near-infrared LEDs to light up dark rooms for the cameras. It immediately begins taking photos and testing for methane, carbon monoxide, and dangerously high temperatures. A microprocessor inside the ball then stitches the photos together and converts the raw data for transmission over wifi. Just seconds after the toss, a wrap-around panorama—complete with environmental warnings—appears on the synced tablet or smart device.

One more start-up with good prospects was Skully Helmets. Their smart motorcycle helmet goes way beyond head protection.  The Skully P1 has a heads-up display which shows 180º of the scene behind the rider as well as simple turn-by-turn GPS maps using onboard optics, cameras, sensors and microprocessors.

One tidbit garnered from an Expert Brief by Evernote CEO Phil Libin was regarding acquisition valuations – how do you earn 5-10 times earnings as a value for your company? The single most important criteria seems to be percent of sales growth. If sustained year over year growth is 60% or higher, you have a disruptive winner capable of getting 10 times earnings as an acquisition price; if growth is 20% to 59%, you’re still a winner but your multiple will be closer to 2 to 5-times earnings; less than 20% growth is considered a failure in terms of acquisition possibilities.