Sarcos Technology and Robotics Corporation is acquiring RE2 Robotics, a Pittsburgh-based developer of autonomous and teleoperated mobile robotic systems, for $100 million. The deal consists of $30 million in cash and $70 million of Sarcos common stock. The deal is expected to close in the second quarter of 2022.

Both companies have had long-term success with military and defense customers. The companies have never collaborated, but Sarcos’ president, CEO and director Kiva Allgood said there has long been a mutual admiration.

“This transaction brings an innovative company with a complementary but additive suite of products into the Sarcos family, allowing us to offer a much wider range of solutions to address our customers’ needs,” said Allgood. “It will also allow us to expand our offerings to new industries such as medical and subsea, deepen our team of robotics experts, and advance the development of AI and machine learning technologies for use in unstructured environments.”

The combined company will offer an extended product portfolio. The companies said this will enable it to target a much broader spectrum of customer needs across the commercial (aviation, construction, medical and subsea) and defense sectors. The initial product line will include: “There’s been a pull in the market for robotics outside the factory floor,” said RE2 founder, president and CEO Jorgen Pedersen, who will become Sarcos’ chief operating officer. “Both companies started to respond to that and realized we’d be stronger together.”

The deal also nearly doubles Sarcos’ engineering team and adds Pittsburgh, one of the world’s leading robotics clusters, as a second location. RE2 will eventually be rolled up into the Sarcos brand but will remain in Pittsburgh.

“We love being on Robotics Row here in Pittsburgh,” said Pedersen, who founded RE2 Robotics in 2001. “It has a very strong robotics community and engineering universities.”

Sarcos said it will benefit from revenue associated with RE2’s existing contracts, which includes contracts with the government to develop innovative robotic systems for underwater and industrial solutions and a developmental partnership with a leading, manufacturer and provider of mobile elevating work platforms and access equipment.

RE2 recently told The Robot Report about its business evolution and broadened focus on industrial markets. RE2 generated about $15 million in revenue in 2021. Sarcos, which went public in 2021 via a merger with a special purpose acquisition company (SPAC), generated $1.1 million in revenue in its third quarter of 2021. It lost $37 million quarter, which it attributed to one-time expenses associated with the SPAC merger. Its fourth quarter results are being announced on Tuesday, March 29. 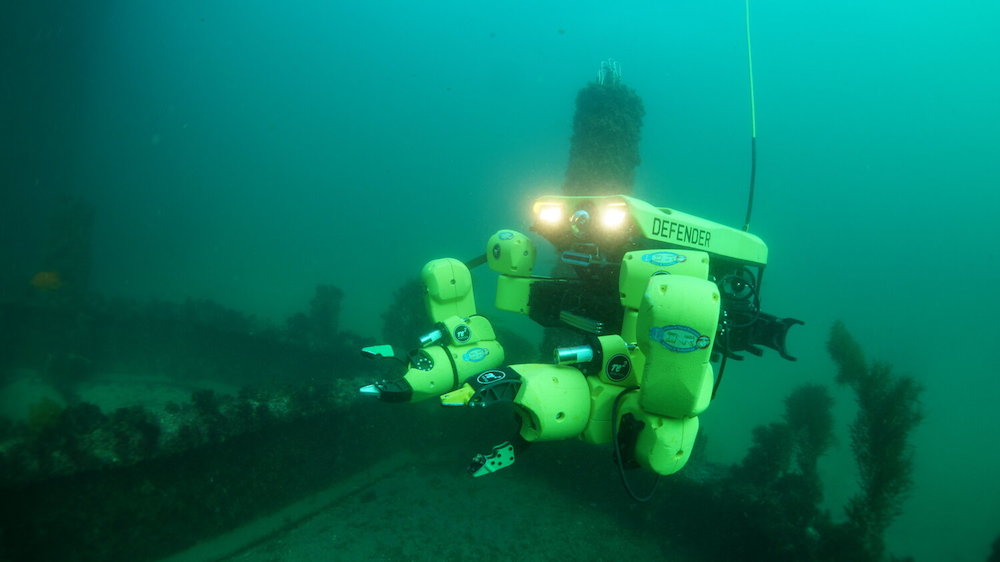 RE2 Robotics recently received a contract to create a robot to autonomously neutralize underwater mines.

The acquisition adds another chapter to an already fascinating story for RE2 Robotics. The company bootstrapped for many years and has only raised two small rounds of funding.

“I started this business with $1,000 in the bank in 2001,” said Pedersen. “It’s been organic growth over the years, building a strong culture with kind, brilliant, highly effective people. I get to continue this journey, just with an extended family.”

Pedersen said he’s also excited about the rebranding, referencing the confusion that often arises over the RE2 moniker. Is “RE Squared” or “RE 2” the correct pronunciation? Even Pedersen seems unsure at this point.

“I’d be lying if I said there wasn’t any sadness about the name going away,” he said. “But on the other side, the marketing department will be glad that RE2 goes away. When you write that down, it’s always a question about how it gets represented. But that’s what happens when an engineer starts a business.”