How did it come to be that Japan’s nuclear power authority didn’t have any emergency robots ready to assist with damage and control? Why were they caught unprepared?

In the days after a giant tsunami knocked out Fukushima Daiichi’s cooling system, the prime minister’s office and the Tokyo Electric Power Company, or Tepco, the plant’s operator, wrestled over whether to inject cooling seawater into the reactor buildings to prevent catastrophic meltdowns, and then over how to do it.

With radiation levels too high for workers to approach the reactors, the Japanese authorities floundered. They sent police trucks mounted with water cannons — equipment designed to disperse rioters — to spray water into the reactor buildings. Military helicopters flew over the buildings, dropping water that was scattered off course by strong winds, in a “performance, a kind of circus” that was aimed more at reassuring an increasingly alarmed Japanese population and American government, said Kenichi Matsumoto, an aide to Prime Minister Naoto Kan.

What became clear was that Japan lacked some of the basic hardware to respond to a nuclear crisis and, after initial resistance, had to look abroad for help. For a country proud of its technology, the low point occurred on March 31 when it had to use a 203-foot-long water pump — shipped from China, an export market for Japanese nuclear technology — to inject 90 tons of fresh water into the No. 1 reactor building. But perhaps more than anything else, the absence of one particular technology was deeply puzzling: emergency robots.

“The plant operators said that robots were not needed,” said Hiroyuki Yoshikawa, 77, an engineer and a former president of the University of Tokyo, Japan’s most prestigious academic institution. “Instead, introducing them would inspire fear, they said. That’s why they said that robots couldn’t be introduced.” [NY Times] 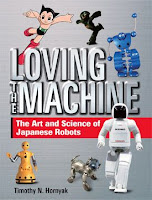 There are significant cultural differences between Japan and Western countries, some hundreds of years old and others more recent.

The “robot journey” in Japan has been the discovery of fantastic entertainers, tools, and, ultimately, friends in robots. Because of this rich tradition, Japanese are especially able to see robots as something more than mere tools, buckets of bolts, or steel and silicon. They can welcome them as partners in everyday life with surprising ease. [Tim Hornyak, from his book Loving the Machine]

In the present situation two powerful themes are influencing decisions on a daily basis: a belief in the safety of nuclear power developed from 50 years of PR, and Japan’s seniority system.

“In Japan, we have something called the ‘safety myth,’” Banri Kaieda, who runs the Ministry of Economy, Trade and Industry, which oversees the nuclear industry, said. “It’s a fact that there was an unreasonable overconfidence in the technology of Japan’s nuclear power generation.”

As a result, he said, the nuclear industry’s “thinking about safety had a poor foundation.”

Japan’s government has concentrated its propaganda and educational efforts on creating such national beliefs in the past, most notably during World War II. The push for nuclear power underpinned postwar Japan’s focus on economic growth and its dream of greater energy independence.  [NY Times]

Japan’s seniority system often gets in the way of productivity and efficiency. Teachers complain that principals and administrators, having been rewarded their positions based on seniority rather than merit, are often ceremonial leaving the real work for teachers to pick up.

In the case of Fukushima, both iRobot and QinetiQ, companies that volunteered equipment to Tepco, instructors found that senior Tepco employees were chosen to be trained to operate the American and British robots yet they were less suited to the task than the 20-year olds who had gamer experience. The remote-controlled PackBot and Talon robots and the RC Bobcat tractors, all used gaming consoles to operate their devices and the senior employees were slow to learn. In a recent Webinar on the issue by Robotic Trends, the trainers found that 20-year olds learned in less than a day while it took the older Tepco employees many days to gain the same level of competence.

Tepco is still involved in the containment process and will be for many months. Simultaneous to their activities, and in addition to Japanese investigations, the international nuclear community is evaluating what went wrong and how it might have been handled better for future nuclear power plant “incidents.”

International, as well as Japanese, standards broke down. France, with 58 plants in operation, has a robotic emergency response capability yet Japan, with 54, does not.

The Group of Robotics INTervention on Accidents (INTRA), maintains a fleet of robotics machines capable of intervening, in the place of man, in a major nuclear accident, in and around the industrial buildings of its members. It also assures the continuous training of robot pilots within the installations of company members. [Group INTRA website]

The US, with 104 nuclear reactors, doesn’t have a robotic response group (like the French one). Each utility has it’s own set of procedures and guidelines monitored by the AEC. But the industry does have public relations websites emphasizing the safety of American nuclear power plants.  One site, run by the Nuclear Energy  Institute, uses keywords safe, secure, reliable and responsible with only cursory descriptors of actions and plans that make our reactors safe or secure or reliable or responsible.

Hence the question: does America have it’s own ‘safety myth’ in relation to nuclear power?