What a month it was for robotics. Whether it was Anki’s patent portfolio going on sale, Teradyne adding to its robotics portfolio or the new Sawyer Black Edition cobot from Rethink Robotics GmbH, there was no shortage of robotics stories to cover in October 2019. ABB showcased a number of concept technologies when it opened its first global healthcare research hub on the Texas Medical Center (TMC) campus. But a mobile YuMi robot that assists with laboratory and logistics tasks in hospitals stole the show. The dual-arm, mobile YuMi will be able to sense and navigate its way around its human co-workers autonomously, while learning to find different routes from one location to another. It has the potential to undertake a wide range of repetitive and time-consuming activities. Read Full story Realtime Robotics, a Boston-based startup developing responsive motion planning for robots and autonomous vehicles, closed a $11.7 million Series A round. It will use the funding to accelerate the development of more commercial products and expand its team. The Robot Report named Realtime Robotics one of 10 startups to watch in 2019. Read Full Story Manual inspection of pressure vessels for oil and gas production is not a glamorous job. Just ask Omar Eleryan, who had to this as part of his job after he graduated from the University of Calgary with a mechanical engineering degree. This led Eleryan to co-found Cleo Robotics in 2016. The Boston-based startup is developing the Cleo Dronut, a compact and rugged drone designed for safe operation indoors and in confined spaces for reconnaissance and inspection applications. Read Full Story MIT engineers found a way to speed up the planning process required for a robot to adjust its grasp on an object by pushing that object against a stationary surface. MIT found a compact way to solve the physics of these manipulations, in advance of deciding how the robot’s hand should move. They did so by using “motion cones,” which are essentially visual, cone-shaped maps of friction. Read Full Story A major challenge for making robots smarter has been the massive amounts of data that they need to be trained on. TRI claimed that its methods, which include using simulations and virtual reality (VR) to train a robot to conduct certain tasks, require less data. The patent portfolio for Anki, the once-popular consumer robotics company that closed in April 2019, is up for sale. The sale includes, among other things, 45 issued utility patents for the Overdrive, Cozmo, and Vector product lines. Hilco Streambank, which is handling the sale, will be accepting offer through November 21, 2019. Read Full Story 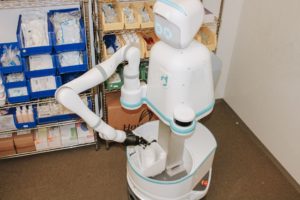 The Moxi service robot is designed to retrieve hospital supplies and be friendly to humans. Moxi uses machine learning for object recognition, grasping, and learning tasks in real time. It was built on a mobile base and navigation software based on the Robot Operating System from Fetch Robotics. Read Full Story While manual labor will likely always be a huge component of modern construction, technology has been steadily improving since the first pulleys and power tools. Robots, drones, autonomous vehicles, 3D printing, and exoskeletons are beginning to help get the work done. With low U.S. unemployment and shortages of skilled labor, automation is key to meeting demand and continued economic growth. Read Full Story