by Frank Tobe and Manoj Sahi

The consumer robotic market has been on a roller coaster ride of evolution and market penetration. The amount of money companies and consumers were paying for robots and the features that they were getting ultimately did not match up. Low-cost service robots have similar problems. The technologies and robot components being used were highly expensive and had to be downgraded to make the cost acceptable. Thanks to a few breakthroughs that are happening in the domains of sensing, electric actuation, communication, open source software and Internet, consumer robotics is on the threshold of entering a new phase of affordable robots.

The radical game changing sensor, Microsoft’s Kinect 3D for Xbox 360, available at a mere $150, is a dirt-cheap way to bring depth sensing and 3D vision to robots. It is a motion sensing input device and works by projecting an infrared laser pattern onto nearby objects and, through some amazing software, provides full-body 3D motion capture, facial recognition and voice recognition capabilities. These are awesome abilities to incorporate into a robot, and Windows SDK from Microsoft promises to make it even easier. Within weeks of the device’s release, YouTube was filled with videos of Kinect-enabled robots. The device has shown compelling potential for use in live 3-dimensional videoconferencing and telepresence applications. Kinect may not be good enough for highly complex robotic systems for industries, defense, etc. but for sure it is a breakthrough technology for consumer robotics – enabling low-cost vision functionality – which will lead to many more breakthroughs and applications.

For the last 30 years, industrial robots have been used in manufacturing processes but these are too dangerous, too rigid and too unpredictable to work alongside humans just like a team member. They need to understand human presence and touch. The series elastic actuator is going to help make that possible. Series Elastic Actuators were invented at the MIT Artificial Intelligence Lab. According to Rodney Brooks, co-founder of iRobot and founder of Heartland Robotics, “The use of series elastic actuators changes the whole approach to manufacturing robots. It makes the robot able to safely interact with people.”

So what is so special about series elastic actuators? They incorporate an instrumented elastic spring component between the motor and the object or load. Although this is a small change, it makes a huge difference to the entire equation. It improves the quality of the actuator package while reducing its cost. The robot is more efficient and has better force control stability. Nature is the best place to find examples of such actuation. Animals commonly utilize the elasticity of tendons to store energy in one part of a locomotive cycle and release it in another, with the muscle doing much less work overall than would otherwise be required. A number of robots have been built incorporating series-elastic actuators, NASA’s Robonaut 2 and Heartland Robotics’ as-yet unnamed workplace assistant are examples. In consumer robotics, a robot cannot work in isolation from human beings and other life forms yet it must not hurt them while interacting. These actuators – and their low cost – have got that potential and are making it possible.

Highly accelerated growth in communication technology is enabling telepresence robots to reach consumers in a lesser time than predicted by market pundits. The internet, wireless communications and display interfaces are becoming faster, reliable and economical. Utilizing these developments, telepresence robots have started sharing floor space with humans in offices and hospitals. With the entrance of big players like iRobot and emergence of companies like VGo, Luna and BiliBot, the party seems to have just started.

Big Companies, Through Strategic Partnerships, Stimulus and Investment, Are Joining The Party

Industrial and special purpose robotic manufacturers are beginning to enter the service robotics marketplace. iRobot and Adept, two large American robot manufacturers, are good examples. Adept recently acquired Mobile Robot to add mobility to its products and establish a lower costing service robots line of products. iRobot has a high-end range of products which it sells to defense and security organizations worldwide along with its range of consumer products (Roomba, Scooba, etc.). What it doesn’t presently have is a mid-range set of products. 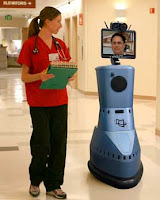 iRobot started a new healthcare division earlier this year and recently announced a partnership with InTouch Health. InTouch Health already has produced and sold their mobile robotic telepresence solution to over 400 hospitals. InTouch Health’s hospital clients can contact doctors or other specialists based hundreds or thousands of miles away, and give medical professionals unlimited reach through their system of robotics and communication devices. This new partnership between iRobot and InTouch Health will help to explore more potential opportunities. The AVA mobile platform from iRobot is a much lower-cost and technically sound robot which is likely going to enable InTouch to lower their cost and selling price thereby bringing their products to a wider marketplace, perhaps even branching out into other areas of business where telepresence communications are a necessary solution. According to Moji Ghodoussi, a VP at InTouch Health, “It is indeed a great partnership and we are very excited and looking forward to great things.” It is a win-win for both companies and is surely going to add more value to telepresence while bringing down robot cost considerably and adding a user-desirable front-end device (tablet). Soon we will find telepresence robots far more effective than making phone calls or sending e-mails.

The App Store concept pioneered by Apple, which is changing the face of many industries, has already started showing its colors in robotic applications. Thousands of videos can be found about controlling robotic devices using iphones and Android based tablets. Initiatives like RoboEarth, an EU-sponsored project, are beginning to provide a giant network and database repository where robots can share information and learn from each other about their behavior and environment. This will enable a better way of robot collaboration and information sharing. It was not a surprising move when Google and Willow Garage announced cloud robotics during Google I/O 2011. The first pure-Java implementation of Willow Garage’s ROS was released. This new library was developed at Google with the goal of enabling advanced Android apps for robotics. The library, tools, and hardware that come with Android devices are well-suited for robotics. Smart phones and tablets are sophisticated computation devices with useful sensors and great user-interaction capabilities. Android devices can also be extended with additional sensors and actuators thanks to the Open Accessory and [email protected] APIs. iRobot has partnered with Google to have Android apps run on its iRobot AVA mobile robotics platform and is open to a similar arrangement with Apple and it’s iOS for iPads and iPhones. At present Willow Garage is also leading the open source library development of The Point Cloud Library (or PCL). The PCL is a large scale, open project for point cloud processing containing numerous state-of-the art intelligent algorithms. This project is funded by Willow Garage, NVidia, Google, and Toyota.

Consumer robotics current group of skills are brittle and some fail if a small change is introduced in their constrained environment. Many believe that the bottom up approach of training the robot in one task at a time and building libraries of tasks will help them to be more versatile and effective. Others feel that a breakthrough is needed in Artificial Intelligence for a flexible perception. Events like ‘hackathons’ and other contests and prizes are helping to realize this much needed breakthrough in flexible perception. All of these activities, partnerships, collaborations, and product announcements are the tip of the iceberg as robotics break into the $5,000 to $15,000 price point – a place where businesses can afford to experiment with these new tech devices.

All these breakthroughs are pointing towards a better and bigger service robotics market in two to three years. The key will be to make them practical, affordable and acceptable by humans as a part of their lives. The way big companies are utilizing their profits, investing, and showing their interests is highly encouraging as is the recent spate of manufacturing-focused government stimulus programs in America, Korea and the EU.

[Frank Tobe is the owner/publisher of The Robot Report and this blog (Everything-Robotic).
Manoj Sahi is a young entrepreneur from India, co-founder of a robotic start-up company and a graduate Mechatronics engineer.]