A voxel grid generated from point clouds, not data from a camera, showing Isaac AMR in action. | Source: NVIDIA

NVIDIA’s AMR system is targeted towards large deployments in big facilities, where mapping can be time consuming and fleet management can be tricky. Isaac AMR works with a number of NVIDIA’s platforms, including Omniverse, Isaac Sim, DeepMap, Metropolis and ReOPT.

Isaac AMR uses NVIDIA’s Omniverse for creating a digital twin of a facility where AMRs are being deployed. Isaac Sim can then simulate how robot fleets, humans and other machines behave. The platform will also generate synthetic data for training of AI models. 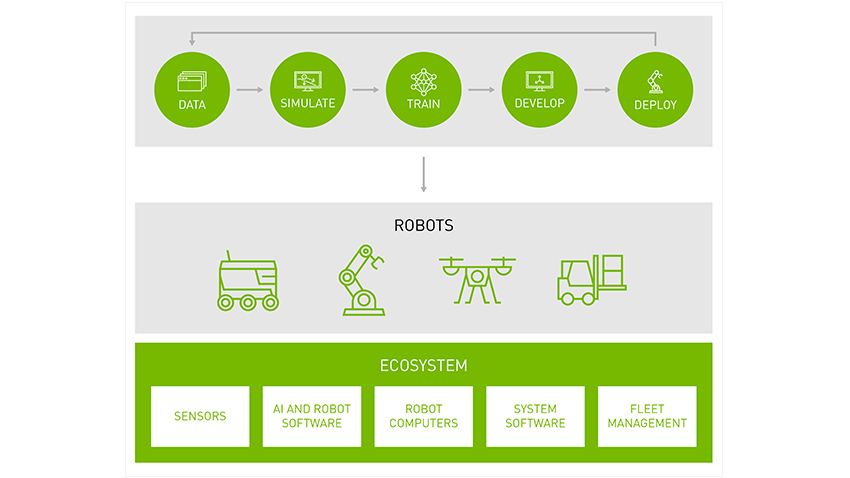 Facilities are mapped using DeepMap, a startup that the company acquired in June 2021. DeepMap created high-definition mapping software for autonomous vehicles. NVIDIA is using that same software to map indoor and outdoor facilities for AMRs.

The maps can be updated in real time as things change in the environment. DeepMap’s SDK allows robots to identify real objects that pixels on a map represent and respond to them accordingly.

NVIDIA Metropolis is a video analytics platform that works alongside SmartMap. It allows access to cameras and sensors deployed throughout a facility. Metropolis also gives AMRs the ability to have greater situational awareness, and to avoid high-congestion areas.

The final part of Isaac AMR is NVIDIA’s ReOpt AI software libraries. These libraries can be used to optimize vehicle route planning in real time, taking into account robot speeds, battery life, transport size and weight and facility layout. With ReOpt and Isaac Sim, it’s possible to simulate multiple AMR interactions before robots are ever deployed.

The technologies that make up the Isaac AMR platform can be deployed and managed on EGX servers with NVIDIA Fleet Command.