The week long IEEE/RSJ International Conference on Intelligent Robots and Systems (IROS 2011) was host to more than 1,500 roboticists and robot-interested people from 40 different countries, including a prominent group of well-known speakers and exhibitors.

The conference and exhibition, in addition to the presentation of hundreds of scientific papers about robotics, included field and dinner trips which took advantage of San Francisco and the Silicon Valley’s unique venues. Monday had a field trip to the robotic labs at UC Berkeley; Tuesday had a sunset dinner cruise in San Francisco Bay; Friday and Saturday had field trips to Adept  (a manufacturer known for their ultra fast parallel robots), and the robot and AI labs at Stanford; and Wednesday had a dinner at the de Young Museum in Golden Gate Park with a peek at the Picasso masterpieces presently being exhibited.

The science of robotics was the principal draw for the attendees to the conference: to present and also to hear new technologies in and about robotics. Fascinating new developments in micro manufacturing to produce super-small devices (millirobots); replacing robotic mechanisms based on mimicking biology (biomimetic robotics); breakthroughs and incremental improvements to research robots of all types; and the many uses of Microsoft’s Kinect device were in evidence throughout the conference rooms and exhibition halls.

I’m not a robotic scientist and The Robot Report mainly tracks the business side of robotics even though the science and research side feeds their product development. My background is computers, programming, software and systems. Consequently I’m not the best judge of what was new, groundbreaking, disruptive or just plain whimsical at the conference. I did, however, see and hear a few things that were of interest to me: 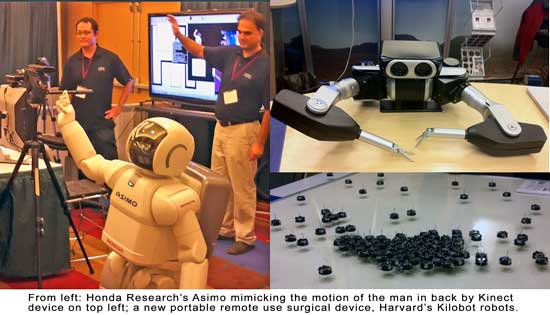 Many exhibitors were showing personal and other types of robots for use as educational tools to learn the many sub-disciplines involved in robotics. Lesson plans for both students and teachers accompany their robots. Companies like these (with the exception of KUKA, where educational products aren’t intended to make a profit) are limited in their growth potential because there are so few schools with the money to buy their product. Unlike robot manufacturers that produce hundreds and even thousands of robots a year, these companies build just a few.

Other small company exhibitors provided specialized robots for scientific research yet no matter how altruistic their research objectives might be, their marketplace is quite limited. This was the essence of IROS for me: as much as incremental improvements in the science of robotics is necessary, much of the material presented didn’t solve any mass market need nor disrupt any present production or process methodology. One exception was Aldabaran’s Nao robot. There are over 1,500 Naos in the field with avid fans providing software apps and updates and demanding fixes where they are needed.

Consequently whenever I asked any of the conference exhibitors when will a real personal robot be available to perform consumer applications (like doing the laundry, dishes, household cleanup, and cleaning the bathroom and toilet) at a price that people are willing to pay, the answer was always the same: “It’s five years off.”