Nearly 80% of businesses recently surveyed expressed concern about the ability of their cleaning staffs to comprehensively clean, said Avidbots, which said it has observed a 100% increase in demand worldwide during the COVID-19 pandemic.

Avidbots was founded in 2014, and it raised $24 million in March 2019. Its customers include Singapore Changi Airport and 3M. In April 2020, the company deployed Neo to Cincinnati/Northern Kentucky International Airport and announced that logistics provider DHL would be installing hundreds of its robots.

Neo 2 is more than a mobile robot for cleaning. Avidbots said the new model integrates technologies including its Avidbots AI Platform, 14 sensors, and the proprietary Avidbots Command Center. Neo 2 is intended to operate with minimal human intervention, moving at 1.35 m./4.3 ft. per second (3.01 mph).

“As we move into more complicated verticals, such as retail stores, we wanted to fit the robot with the best coverage in sensors,” said Pablo Molina, co-founder and chief technology officer of Avidbots. “Neo 2 has 360-degree coverage with lidar, and 270 degrees with 3D cameras. It is able to perceive the world and avoid obstacles much better.”

“We’re a robotics company first, so to deliver the best experience and reliability to customers, we used the best parts that we could put our hands on,” he told The Robot Report. “With advanced diagnostics, we will soon be able to [monitor] the sensors in every actuator — like Tesla for autonomous vehicles, measuring current and voltage. It’s very important for uptime.”

“Neo 2 has been in the works for about three years,” said Faizan Sheikh, co-founder and CEO of Avidbots. “We spend a lot of time working on active cleaning; we do the whole stack.”

Sheikh and Molina said that Neo 2’s features were developed with customer feedback.

“We serve many different verticals, which have different requirements,” Molina said. “The big goal is true automation, where you press play, and the machine cleans. In the warehouse space, people asked for signaling — strobe lights, LEDs, and headlights, and we can program sounds.” “Avidbots’ AI platform for path planning runs in both the previous version and Neo 2, where we spent time working on sensors, testing, and the improved perception stack,” said Molina.

“For a warehouse, we’ve seen one to two robots,” Molina replied. “Some are very big — from 200,000 to 1 million sq. ft. — and our robots can navigate them with no problem. Some airports have bought 20 robots, with three to four per terminal.”

“Our biggest building is a shopping mall in Australia, which has six robots cleaning every night,” he added. “Warehouses may not need to be cleaned as often.”

“Avidbots is leading the pack in fleet management,” Sheikh said. “Our cloud-based Command Center is able to monitor the whole fleet. It becomes increasingly important to manage the right amount of hours for KPIs [key performance indicators] of coverage and productivity.”

As facilities begin deploying robots from multiple vendors, how much of a concern is interoperability?

“It is something that has come up a few times,” Molina acknowledged. “We don’t have that many interoperability features, but we are keeping tabs on a few forward-thinking customers. I’m very happy to see the OSRF [Open Source Robotics Foundation, or Open Robotics] working on a robotics middleware framework. We need to wait for other companies to have interoperability, but buildings will also need to support it.” “The pandemic has brought a lot more attention to cleaning and sanitation,” said Sheikh. “The ‘three Ds’ of dangerous, dull, and dirty have hit home. We’re already deployed in quite a few colleges, and they’re very interested in a disinfection module.”

Avidbots has plans for a disinfectant add-on. “We have no date set yet. Our robot would not only clean floors, but also disinfect high-traffic surfaces with a chemical spray,” Molina said. “Many customers are excited because this is typically done by hand 20 hours per week, which is more time spent disinfecting than cleaning. This is a perfect application for a robot. We’re able to see the facility and pinpoint use of chemicals at the right location, distance, and rate.”

“We’re taking our time to understand this space,” he added. “By using an electrostatic spray, the ionized particles can wrap around things such as door handles. By controlling the distance from the nozzle — between 0.5 to 1.5 meters — we can spray in a cone to cover benches, tables, and chairs.”

Multifunction robots may be inevitable, but they pose technical challenges, said Molina.

“Drive trains and sensors are expensive. Robots are like computers in the 1970s — you needed a mainframe for accounting, optimization, or spreadsheets. Then we combined functions,” he said. “We want to make sure that our robots are safe and actually disinfect. The time and application are different from sanitation. We’re running a bunch of tests.”

“UV robots are scary,” said Sheikh. “At Avidbots, we are paying close attention to safety, and we’re active in the IEC [International Electrotechnical Commission] for safety. Some sprays are safer for humans — sodium- or solvent-based — we need to do analysis of this. We’re in talks with suppliers.” 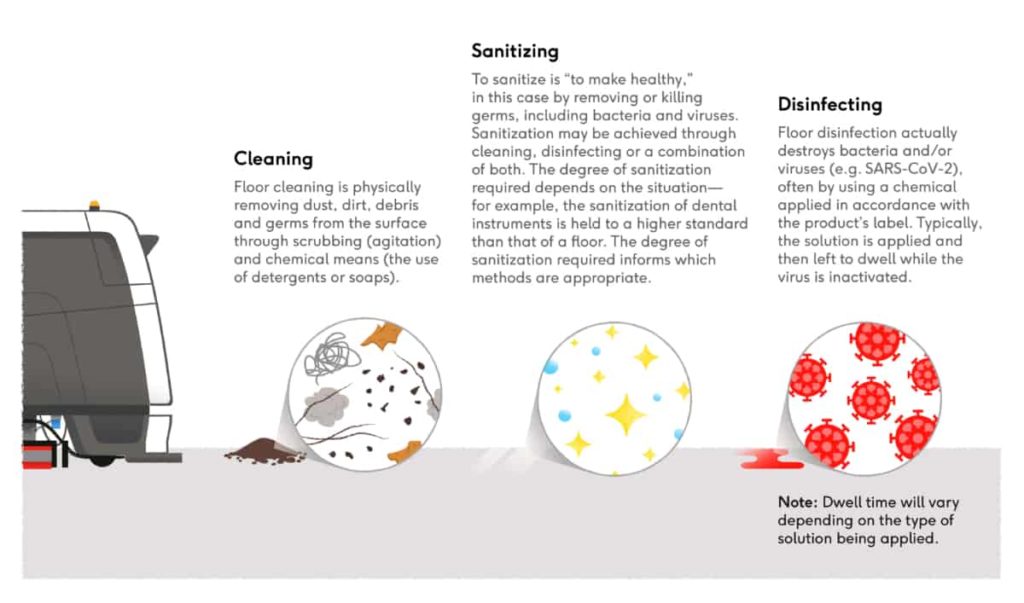 “Neo 2 costs in the low $50,000s, not including batteries,” said Sheikh. “Some customers can get ROI [return on investment] in less than six months.”

“We understand cleaning, but we never saw Neo as a cleaning robot only,” Molina said. “We saw it as a platform that can be added on to, as with our Command Center. There will be more add-ons to expand functionality.”

“The majority of our customers are buying Neo 2.0. We’re talking to 3PLs [third-party logistics providers] and retailers,” said Sheikh. “We’re experimenting with business models. Rentals, or robotics as a service [RaaS] is an option now and will help adoption. Some of our customers are large companies and are not as interested in rentals, but it’s where the industry is going.”

“The next five years will see a big explosion — every analysis firm sees 20% to 30% of the whole market,” Molina said. “It’s currently $8 billion, and robots are disrupting cleaning.”