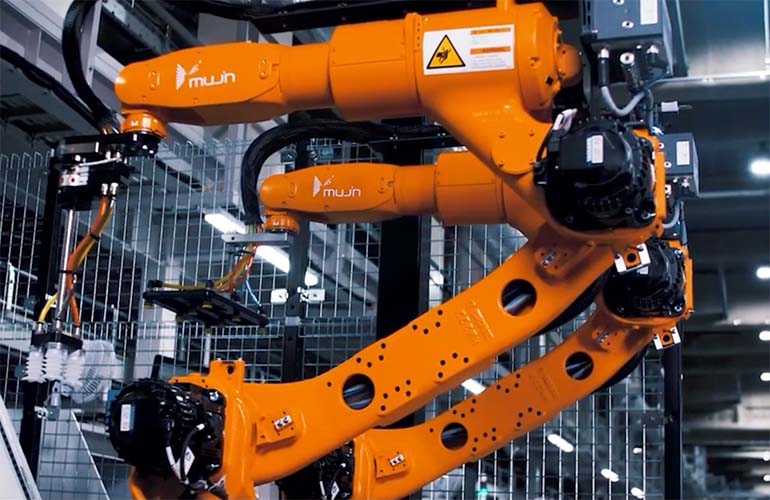 Mujin is a well-established robotics company in Japan, but not well known outside of the Asian market. The company and products have received numerous awards since its inception. The current product is well-tested, with hundred’s of systems deployed into industrial applications within Asia. The new corporation and office in Georgia will serve as a regional hub for expanding the company’s solutions into the US.

Mujin’s flagship product, the Mujin Controller (the Controller), offers an all-purpose intelligent robot control system. It uses real-time perception, motion planning and universal control to create robots that can handle complex logistics tasks. The entire solution is designed to make system deployment faster, more reliable and more affordable, and without the need for coding or the training of any vision models.

The Controller can manage any industrial robotic application by guiding the movement of any robot arm via machine intelligence, a new and advanced category of artificial intelligence that automatically manages potential downtime scenarios through autonomous motion planning and perception without the need for human intervention.

The solution and software is especially optimized for:

“Companies that want to automate mundane and repetitive material-handling tasks face a myriad challenges, from the high costs of developing solutions for their difficult applications to unscheduled downtime and reprogramming costs when things don’t go as planned or when robots must be reprogrammed due to a change in product or workflow,” Diankov said. “As some of the largest companies in Asia have experienced, Mujin will bring a new wave of robotics technology to the U.S. market, with robots no longer needing to be taught how to move explicitly. Instead, the robots will already ‘know’ what they need through what we call ‘machine intelligence,’ which enables more capability and efficiency for robot picking applications that were previously impractical or difficult to deploy.”

The company OEM’s industrial robot arms from a number of suppliers, but the Controller can also be mated to any industrial or collaborative robot manipulator on the market. The Controller takes a supervisory role to control the robot operations.

Engineered by Mujin, “machine intelligence” is the fusion of real-time motion planning, perception, simulation, and control technologies. Unlike traditional ‘teach-based’ systems that require experts to program each movement or machine learning systems that ‘learn’ how to pick items over time, machine intelligence, enables the Controller to give a robotic system real-time decision-making capability that allows truly autonomous, reliable and production-capable robot applications.

With this model and through the use of Mujin 3D cameras, the Controller can avoid obstacles and plan operations such as palletizing or depalletizing paths/locations. The system  allows the robot to safely perform tasks by offering high-level goals without explicitly telling the robot where to go or how to move.

Unlike other vision systems on the market, Mujin doesn’t required machine-learning models to be trained for the vision guidance to identify objects or determine grasp orientations. Mujin also offers a variety of end of arm tooling that is built for box/package handling.

“With the robot motion now computed in real time without human intervention, the system must understand the intuitions behind completing tasks and then positions them in a way that enables the robot to dynamically adapt to changing circumstances,” Diankov added. “With the mindset of machine intelligence, Mujin makes every robot more capable, efficient and reliable, and allows robots to perform practically any application with optimum efficiency.”