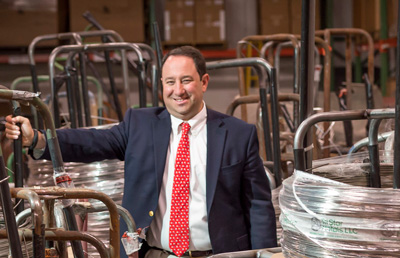 One of robotics' most colorful proponents is Drew Greenblatt, President of Marlin Steel. In a recent NY Times article he vividly describes how he has used robots to automate basket-making to a precision – and competitive – artform. When I bought the company, we had minimum-wage employees who would hand-bend each of the four bends at the top of the bagel baskets. They would do four bends on basket after basket, all day long. Straight out of Dickens. To make a better quality product, we brought in $3.5 million worth of robots. We needed different people to learn how to operate these robots and computer-operated lasers and other fancy equipment. We’ve invested a tremendous amount of money in training them, and now, 20 percent of our employees are degreed mechanical engineers.

Bottom line from the article:

Price differences are starting to get closer, because companies like mine are so automated that our labor costs as a percentage of sales have plummeted. China’s big benefit was they were paying workers 30 cents an hour at one point, and we were paying $15 an hour. Now they’re paying $3 an hour, and we’re paying $30 an hour, but we’re so automated and our guys are so efficient, that our $30-an-hour guy is way more than 10 times as efficient as their $3-an-hour guy.

The full interview can be read here: From Making Bagel Baskets to Thinking Much Bigger by John Grossman, NY Times.