Most car companies are remaking themselves into tech startups as they move toward offering fully autonomous self-driving vehicles. Yet thousands of tractors already use self-drivingÂ kitsÂ as do hundreds of tugs, lifts and trucks. Self-driving aftermarket kits are beginning to be offered in multiple markets.Â What’s going on?

Cruise Automation just got acquired by GM for $1 billion. Up until now Cruise was known as the developer ofÂ a $16,000Â aftermarket kit to turn select cars into self-driving cars. Does GM want to supplement their parts business with self-driving kits? Or did they spend all that money to acquire talent?

Cruise Automation isn’t the only kit developer:Â Comma.ai promisesÂ a $1,000 kit by the end of this year and just got a $3.1 million seed round ofÂ funding; Perrone Robotics is already selling a high-endÂ kit for R&D and testing with funding from DARPA and the IIHS. Other companies are listed below. What’s going on? Are aftermarket kits really that much in demand?

Media today seems most focused on suggesting that the industry is quickly moving toward preventing crashes from ever occuring instead of just protecting occupants from crashes even though there are many other reasons for self-driving (eg, fuel efficiency, lowering carbon emissions, enabling safe transportion for the elderly, and improving traffic congestion).

FromÂ an interview in WiredÂ of Andrew Ng,Â Chief Scientist of Baidu; and Chairman and Co-Founder of Coursera. Iâm in universe one. I think thereâs a lot of confusion about how easy it is to do self-driving cars. Thereâs a big difference between being able to drive a thousand miles, versus being able to drive anywhere. And it turns out that machine-learning technology is good at pushing performance from 90 to 99 percent accuracy. But itâs challenging to get to four nines (99.99 percent).

AsÂ car companies move in the direction of providing self-driving cars, most have proprietary roadmaps and big needs for software and other engineering talent. They have all set up research facilities in Silicon Valley and throughout academia. The Wall Street Journal mapped car company locations in Silicon Valley (shown below) which attests to their proliferation. Not included on this map are the new tech startups profiled in this article. Self-driving kits and embedded software for cars, buses and trucks

Because the auto industry is so much larger and visible to the consumer public, the remainder of this article will focus on self-driving kits and other software and AI offered to the auto, transportation and trucking industries, as well asÂ to the consumer aftermarket. 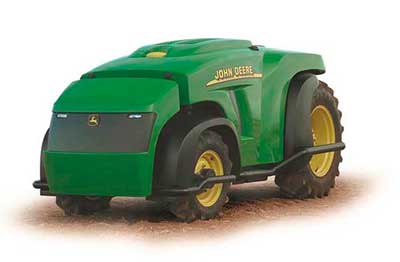 Perhaps the Deere tractor example applies to cars.Â Deere has had self-driving, autonomous, cab-less concept tractors such as the one shown on the right available for discussion and possible sale but thus far they haven’t replaced the self-driving kits which they have been selling for 15 years. Farmers want the air-conditioned and cushioned cabin on their tractors to house all the monitors and other computer and automation technologies for the implements the tractors are towing. They want to remain in charge and the cab has become the hub of computerized farm automation. They say they are waiting for the right time – when fully autonomous tractor systems provide all the services they want and need. And that time is far off in the future.

Maybe carÂ drivers want to remain in charge but are willing to have fun experimenting with low-cost partial self-drivingÂ kits or incremental add-on features on new carsÂ until the time – far off in the future – when fully trustworthy autonomous self-driving vehicles take over the transportation marketplace. Maybe the public isn’t ready yet to fully trust cars, trucks and buses without drivers. Perhaps self-driving kits are an interim step along the way.