As the Mars 2020 mission prepares for launch next week, robotics suppliers are among the organizations contributing to the Perseverance Rover, an unmanned vehicle designed to explore the surface of Mars and collect samples for return to Earth. ATI Industrial Automation worked with NASA’s Jet Propulsion Laboratories to develop a custom force/torque sensor for Perseverance.

ATI’s flagship product is the Robotic Tool Changer, a robotic wrist coupling that locks and unlocks automatically, allowing a single robot to perform many different tasks. The company said its products can be found at some of the world’s most renowned corporations and organizations including NASA, Ford, Honda and Johns Hopkins University.

ATI said its force/torque sensors are often used in robotics applications to enable greater process control and provide process verification, such as indicating that a pin is inserted properly into a fixture.

The Perseverance Rover, which is about the size of an automobile, is part of the National Aeronautics and Space Administration’s Mars Exploration Program. The Mars 2020 mission is intended to search for signs of ancient microbial life, categorize the red planet’s climate and geology to help determine whether inhabitable conditions exist, and recover samples from its surface. NASA’s ultimate objective is to prepare for human exploration of Mars.

Perseverance will collect and index small samples of rock and soil from prime locations. Once onboard, sample tubes are cached inside the rover for eventual return to Earth. This subsystem emulates automated processes found in the agriculture and manufacturing industries, where robots are used to make repetitive operations more precise. ATI said it has developed specialized sensors for application settings such as foundries and refineries that have demanding environments.

However, nothing quite compares to the conditions expected from those on Mars, where subzero surface temperatures and rugged terrain are typical, the company acknowledged. Before landing on Mars, the rover and its subsystems have to survive the initial Atlas 5 rocket launch. JPL needed an automated system for collecting and handling space material, as well as moving it through the indexing process. To accomplish this, engineers developed the Adaptive Caching Assembly, an application that resembles a pick-and-place operation commonly found on a factory floor. ATI noted that developing the systems and components that would perform in the Rover mission was a huge challenge.

The Sample Caching Subsystem consists of the Adaptive Caching Assembly, a large robotic arm with a drill and an assortment of drill bits used to collect samples from designated areas on the surface of Mars. Once collected, a small robotic arm, known as the Sample Handling Assembly or SHA, will inspect and seal the samples in the rover’s onboard laboratory.

An ATI force/torque (F/T) sensor is integrated within the SHA end-effector assembly to provide enhanced responsiveness. With force sensing from ATI, the SHA is equipped to maneuver easily through the tight workspace, performing demanding tasks with acute accuracy, said the company. To deliver a robust force-sensing solution for the Perseverance project, ATI adapted its F/T sensor technology to offset the wide range of environmental conditions. The Space-Rated Force/Torque Sensor from ATI boasts a new design that provides signal redundancy and compensates for temperature variation, ensuring accurate resolution of forces and torques throughout the mission.

This sensor is thermally calibrated and proven to operate optimally in a spectrum of extreme temperatures. To develop and test these breakthrough features, the ATI engineering team designed specialized calibration equipment and conducted 24-hour surveillance of product trials.

Components made of thermally-stable, low-outgassing materials were added to fortify the sensor against drastic environmental fluctuations. These materials also prevent cross-contamination of samples during the mission, which is one of the most important considerations of the Mars 2020 Rover project.

After years of development, the highly anticipated Mars 2020 Rover is fully assembled and ready to begin its mission. Perseverance is set to launch on July 30, 2020, from Cape Canaveral, Fla., and will arrive at Mars in February of 2021. 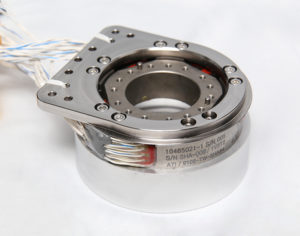 Force/torque sensing back on earth

Through this project, ATI developed new technology that will be a part of NASA history and provide robust and reliable force sensing to applications here on Earth. The temperature compensation, thermally-stable components, and additional signal redundancy could benefit users in industries such as radioactive decommissioning, oil and gas, metal casting and foundries, said the company.

ATI added that it looks forward to the mission, as well as to new F/T sensor applications where conditions dictate continuous use in extreme environments.