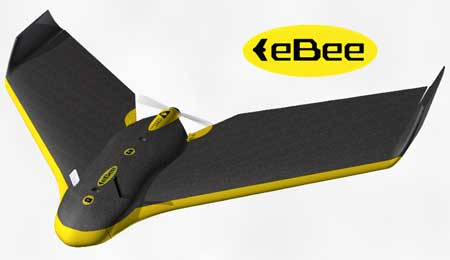 In July, the Parrot Group partnered with senseFly, a Swiss start-up and spin-off from the Swiss EPFL, and invested $5.3 million to help senseFly grow. Their initial plan was to develop a high volume manufacturing capability and fund rapid growth and new product development. The eBee is the first such product from that venture. The just announced 3′ wingspan eBee can fly for 45 minutes in 45km/hr winds, and will enable users to take their own aerial photos and produce precise ortho-mosaics and 3D models. senseFly has also established an impressive global network of resellers which presently excludes the US (because of FAA regulatory limitations).

senseFly, working with another Parrot Group partner and another EPFL spin-off (with a similarly intentioned $2.5 million equity investment from Parrot to spur growth and development), Pix4D, has developed a suite of software which can create a flight path and take 2D geotagged images and then process them into 3D maps.

Below is an EPFL/Pix4D video displaying additional information about the process of filming, tagging and creating 3D maps and images.

When senseFly’s UAVs are allowed into civilian airspace, there are a myriad uses:

As civilian airspace opens to drones like those from senseFly, the sky begins to offer unique perspectives to view and understand our environment. One can see a near-term future where images and data can be captured at low cost, anywhere, any time, and without complex infrastructure or long preparation time and transformed into useful management tools, maps and surveys.

“We are witnessing a revolution whereby flying drones are no longer exclusive to the military but are quickly spreading into the civilian world. In 2010, Parrot surprised competitors and fellow researchers alike when they hit the market with their iPhone-piloted quadcopter for filming and gaming. The same year, senseFly revolutionized the job of surveyors by providing fully autonomous flying cameras capable of producing precise 2D and 3D maps within minutes. Both companies are focused on developing very lightweight drones with the strong belief that this is critical to their use by the public at large – far beyond the military”, says Jean-Christophe CEO and co-founder of senseFly.