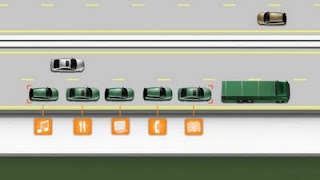 Volvo demonstrated Road Trains. Platooning is the buzzword for moving trains of vehicles to reduce congestion and improve fuel economy – which Volvo expects to be on European roads by 2020. “This is easier than what Google is trying to do,” said Erik Coelingh, a technical specialist at Volvo, to Fast Company. “What we are trying to do is take a step in the middle between the adaptive cruise control cars that we have today and the Google car that we will have in the future.”

Volvo’s trucking group demonstrated Automated Queue Assistance (AQuA) which relieves truck drivers of the monotonous task of driving in traffic queues. When the system is activated the driver can lean back, relax and monitor the system’s performance while AQuA controls the vehicle. “Those traffic queues are not only environmentally unfriendly but also a challenging task for drivers as many traffic accidents can occur in these monotonous circumstances as the driver’s alertness gets reduced,” says Achim Beutner, Volvo Technology specialist. DARPA and the U.S. Department of Defense are attempting their own version of platooning in the near future.

Volkswagen demoed it’s Temporary Auto Pilot (TAP) so you can take your hands off the wheel while cruising down the highway. The system pairs Lane Assist with cruise control, and can be overridden by the driver at any time. The TAP system’s Pilot Mode uses radar, laser, camera, and ultrasonic sensors to maintain a safe distance between vehicles, start and stop in traffic, and slow down before a bend. 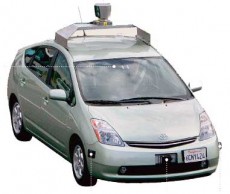 Just last fall, Google announced that its engineers were working on software for self-driving cars. Google’s self-driving cars logged 140,000 miles in California, driving — with a trained driver and software engineer on board — around Lake Tahoe, across the Golden Gate Bridge and along the Pacific Coast Highway.

In support of all these developments, Nevada passed a new law enabling driverless cars in that state and issued a mandate to their Nevada Department of Motor Vehicles to create the licensing and regulations required to administer the new law.

The goals for all these activities are similar: to increase traffic safety and reduce fuel consumption while optimizing safe automation. As a long-time user of adaptive cruise control, I’ve been a fan of this kind of embedded system into the car’s navigation, safety and entertainment system and watched with fascination as these types of systems have won approval and become mainstream.