There have been many headlines about “killer robots” and invasion of privacy. They protest that robots will soon choose targets and then bomb or shoot those targets under their own direction and will also invade people’s privacy through the use of drones. The issue, without the hyperbole, is whether there should be controls, what those controls should be, and who should administer them so that when advanced autonomous versions of today’s drones happen, as is sure to be the case 10-30 years from now, they won’t have the capability to kill people without human and governmental supervision and observe without legal authority.

Drones aren’t the only killer robots being discussed. There are also armed border robots in Israel and Korea, automatic missile defense systems on land and ships in many countries, and police surveillance drones. Except in the case of incoming missile defense, we don’t presently have the artificial intelligence capabilities to autonomously pick targets and implement armed attacks. In fact, we are many years away from that reality. Yet the headlines are written as if it is already happening.

“Killer robots” is a “sell-papers” type of issue. It uses enflamed rhetoric because of America’s prolonged and very public use of armed drones to kill terrorists (albeit with a committee of human pilots and operators that actually pull the trigger even though they are thousands of miles away from the action) and the anger and moral, ethical and legal backlash to that.

Nevertheless, these scary headlines, which call for banning drones of all types, are obscuring the worth of forthcoming commercial applications for unmanned and autonomous flying robots. Unmanned aerial vehicles and systems (UAV and UAS) in agriculture, for mapping and surveying, for search and rescue, disaster relief, science, border patrol and a myriad other applications will begin to appear in America in 2016 (earlier in the EU and Australia where they aren’t as limited by the FAA as are the Americans).

There is no denying the commercial value of these new UASs. One story involving drones occurred recently in Haiti — it has all the elements of smart business, enterprising activists, the fun of flying, and the pleasure of helping. But this story didn’t receive any headlines.

Adam Klaptocz is an engineer and project manager with senseFly, a Swiss spin-off from the EPFL (and recently acquired by the Parrot Group). senseFly makes drones for mapping. Their eBee drone can take pictures down to 2″ precision. Adam and another senseFly employee, Emanuele Lubrano, independently founded a non-profit organization, Drone Adventures, to focus on humanitarian, conservation and cultural uses of drones beyond just mapping. Their first project – funded entirely by donations and grants from the IOM – was a two-week trip to Haiti.

“When a natural disaster (such as an earthquake or a hurricane) changes the landscape of an entire city in just a few minutes, how can rescue teams search for survivors when satellite images no longer represent the state of the city? How can organizations distribute aid and coordinate reconstruction of dense urban areas that expand and change on a daily basis?

“Such dire and complex situations are exactly where drones and their abilities shine! Drones are similar to light and inoffensive RC model planes but with some key differences: they have an artificial intelligence on-board that allows them to fly autonomously and make “flight decisions” (example: my battery is too low, better go back and land now). They are equipped with sensors for monitoring the flight in real time (GPS, altimeter, wind-speed sensor, etc.). They have a “payload” used to deliver a service; in the case of mapping it’s a camera used to take pictures of the ground from the sky.”

Haiti has endured several recent natural disasters including a terrible earthquake at the beginning of 2010, a violent cholera epidemic at the end of 2010 and Hurricane Sandy at the end of 2012. Disasters not only result in casualties but they also change the landscape of the country; buildings and roads are destroyed and refugees create ever-moving encampments. There is a continuous need for up-to-date imagery for aid distribution, reconstruction and disaster relief.

“We arrived in Haiti with three eBee drones, a stack of computers running Pix4UAV by Pix4D and open minds. During our 10 days in the country we worked closely with our partners, IOM (International Organization for Migration) and Open Street Map, two organisations that have years of experience on the ground in Haiti.

“We covered over 45km2 of territory [about 11,000 acres] in 10 different areas during 6 days of intense mapping in some of the densest urban territory we’ve ever worked in to provide international organizations with the maps and 3D models they needed to do their jobs. 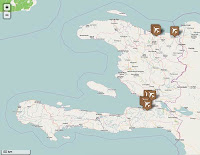 “Mapping of several dense shantytowns in Port-au-Prince, were used to count the number of tents and organize a “door-to-door” census of the population, the first step in identifying aid requirements and organizing more permanent infrastructure. 3D terrain models were also created to identify dangerous river beds in order to plan infrastructures and protect dense urban encampments from flooding.

“The terrain models will also be used to perform water-flow simulations and decide where to build infrastructure to mitigate flooding. We also provided 2D and 3D maps of the brand-new University of Limonade in the north of Haiti to help promote the school for the next generation of youth of Haiti. 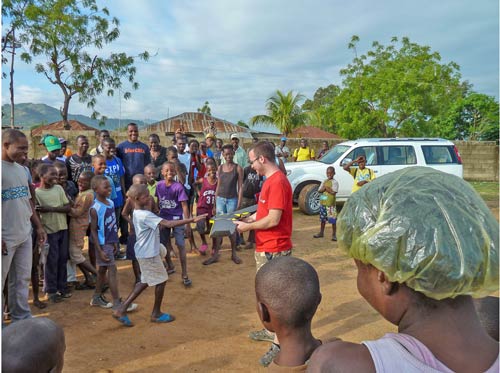 “All the data that we generated has been made freely available through OpenStreetMap to all the great people we met during this mission, and without whom this mission would not have been possible.”

The Drone Adventures video below shows the fun, the involvement, the flexibility and the need. Bravo to these two adventurers and their new organization.

Although Parrot and senseFly didn’t fund Drone Adventures, they think the project is creative and might want to take part in future missions.

I’m worried that all the negative headlines – and fear reactions to those headlines – may lead to legislation which could hamper the natural emergence of this new and very capable technology. Hence the headline of this article: Don’t throw out the baby with the bath water.