Where are the robots? Where’s that $100 billion industry we’ve seen in the forecasts?

Since the 1980’s we’ve seen robots outside of the factory – vacuums, drones, bomb disposal devices, embedded systems for cars, hazardous materials and location monitoring bots – but expected to see more. Our expectations are so much higher than what’s thus far come to market that the industry is looked at somewhat cynically.

Some say the technology is not yet ready; others claim the economic drivers aren’t there to propel the industry forward; still others say that more directed research and funding must occur before major robotic product solutions can happen. Yet even with massive investments by DARPA, the EU and many Asian governments, one can still ask, Where are the robots?

Well, here’s where the robotics industry stands at the end of the first quarter, 2011:

At the Automate 2011 Conference and Trade Show in Chicago last week, the International Federation of Robotics (IFR) held a press conference to reveal glowing reports about the robotics industry’s recovery and prospects for the future. Although their focus in Chicago was toward industrial robots, much of the growth areas in robotics were in the services sector.

Industrial robots are defined as automatically controlled, reprogrammable, multipurpose manipulator programmable in three or more axes, which may be either fixed or mobile for use in industrial automation applications.

Service robotics are all other robots and robotic applications and systems than industrial robots.

The IFR data showed that most of the industrial sector, excluding Japan, had recovered from the 2009 lows of the economic crisis. The U.S. and EU were not fully back to 2008 levels but very close. This was supported by an analyst for the Automation Technology Council of the Imaging Association. His charts showed growth of material handling applications throughout the recession and that welding applications diminished. Also, he predicted double digit growth for motion vision vendors for the next few years. He affirmed my analysis which showed that almost all robotic manufacturers are not American; only integrators are US companies. Quoting from a press release from the IFR: “The automotive industry will drive the automation levels in China. Other industries like plastics, food, and electronics are following.”

The figures from both sources showed three remarkable facts:

The data also showed that although electronics was the second largest application for industrial robotics, up-and-coming areas included food and beverage handling and materials handling in almost all emerging economies, particularly in Asia and Brazil.

The roundtable of executives expressed a shortage of application engineers to support this growth. All of the participants were very sensitive to safety and to maintaining their core business supporting big factories even though they are aware that much of future growth will be in small and medium facilities. This appears to outsiders as slowness but they claim otherwise. They also were protective of their software and control systems suggesting that they are what makes their company unique and successful. Yet only one of them was displaying improved control devices (like iPad controllers). There was no opening for open source amongst them nor was there any real interest in the rapid development of fully human-like robotic hands saying that their applications just needed the right tool at the end of the arm rather than a resource-laden full-featured hand.

Yet these very same features were part of what is propelling the service robotics sector forward… think Robonaut2, DARPA’s ARM project, etc.

Economic drivers propelling these and other service-sector robotics are:

At InnoRobo 2011 held in Lyon, France on dates that overlapped the Automate show, the service sector was presented to a youthful crowd of fascinated students and business people in technical conferences and an exhibition area filled with 100 unique and interesting robots and robotic products including 30 never before shown. Unlike the Chicago show where people were businesslike and established, the crowd at InnoRobo was youthful, energetic, enthusiastic and eager to make contacts and make robots. 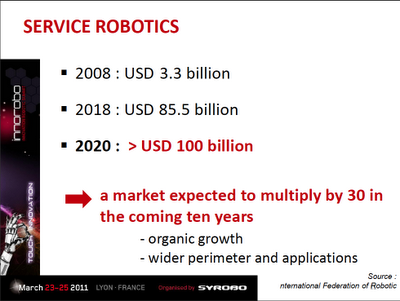 Bruno Bonnell, President of the French Union of Service Robotics (Syrobo) and Chairman of RoboPolis, in his presentation at InnoRobo in Lyon, France, said that the service robotic market would multiply to 30 times the current rate this decade and be a $100 billion per year industry by 2020!

Japan, South Korea, Taiwan and China’s governments are aware of these projections and have created robotic stimulus programs with this $100 billion industry in mind. Gaining market share will provide jobs and revenues to these strategic early planners — America take note.

Two-thirds of present-day service robotics industry revenue is in defense, security and space but it is expected that near-term and future growth will be be in the five groups shown above (healthcare, energy, education, et al).

In a discussion amongst business executives, research people, and governmental officials at the InnoRobo forum and also at a City Hall presentation, one could easily see and feel the difference in focus between industrial and service robotics: from protecting, maintaining and growing a known industry to supporting and encouraging the entrepreneurial flare of start-ups, research and business growth challenges and scaling up of emerging robotic systems. The French governmental officials were not only responsive; they were backing their support with incentives as are most other countries wishing to be in this future burgeoning marketplace.

Market research indicates smart toys, educational kits, tutorial and teaching devices, home cleaners and lawnmowers are all reaching the price point for the mass market to accept and adapt to these consumer robotic products. Further, it was the general consensus at the business forum that there were two major trends underway:

A key phrase described the desired robotic product of the future: an attentive partner. Let your imagination go with those words… and imagine an attentive partner in the factory, or at home, or at school. It needn’t be humanoid, just functional; just a partner in your endeavors, attentive to your needs and timing. That’s the dream – and based on the energy, investment and enthusiasm of the crowd at InnoRobo, that’s what our near-term future is likely to hold for us: devices to help with schooling, eldercare and movement, assistance in medicine, surgery and in the factory as well as mobile and flying devices to help us protect and preserve our property and infrastructure.

In an editorial in the IFR World Robotics Service Robotics Report for 2010, asking the same question as mine (Where are the robots?), Nicola Tomatis of BlueBotics SA, a spin-off from the EPFL in Switzerland, asked (and answered) a question we are all asking.

My advice to the service robotics community is… Start new ventures, go out to meet users and experts, be open-minded and creative, and team up with the right partners to create the added value that will bring service robotics to success!

His response mirrors my thoughts entirely… which is why one of the periodic ads on The Robot Report is my personal ad asking readers if they need marketing, management and financing for their robotic endeavors.