The Consumer Technology Association (CTA) today announced that Energy Systems Network, the organizer of the Indy Autonomous Challenge, will host a new race event scheduled for Friday, January 7, 2022 at the Las Vegas Motor Speedway, in conjunction with the Consumer Electronics Show (CES) 2022. The event will be open only to attendees of CES.

History will be made again in Las Vegas where university race teams will compete in a head-to-head, high-speed autonomous racecar passing competition. In October 2021, these same race cars set new autonomous driving speed records at the Indianapolis Motor Speedway during the inaugural Indy Autonomous Challenge. The winner of the competition in Indianapolis was TUM Autonomous Motorsport from the Technische Universität München in Germany. TUM won the prize of $1M. A new format for the Autonomous Challenge @ CES

The original race format was intended to be a head-to-head competition, however, there wasn’t enough time for all of the teams to reach the milestone of being able to run safely on the track at the same time. Thus the IAC competition in October evolved to be a time trial and high speed obstacle avoidance event. TUM won the event with an average lap speed of 136 mph. Race cars are prepped by the teams in the pits at the Indy Autonomous Challenge in October 2021. | Image credit: Mobile Robot Guide

“Autonomous racing is expanding the boundaries of tech and we’re thrilled to welcome the Indy Autonomous Challenge to CES,” said Gary Shapiro, president and CEO, CTA. “With automotive and transportation tech tracking for record growth at CES 2022, the Autonomous Challenge @ CES will further show our attendees all that is possible with self-driving vehicle technology.”

The primary goal of this competition is to advance technology that can speed the commercialization of fully autonomous vehicles and deployments of advanced driver-assistance systems (ADAS). Designed by university teams, these enhancements will lead to increased safety and performance in motorsports as well as all modes of commercial transportation. In addition, the competition is a platform for students to excel in Science, Technology, Engineering and Math (STEM) and inspire the next generation of innovators. 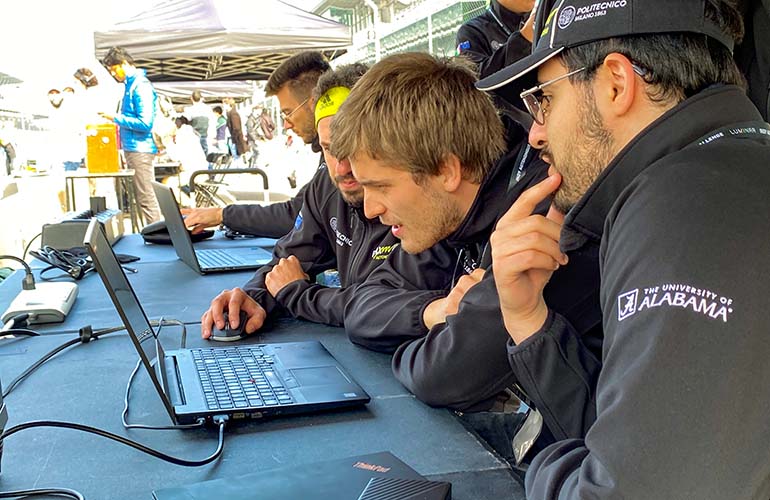 The race crew for Team Polimove makes some last minute parameter adjustments to the vehicle prior to their qualification run at IAC 2021. | Image credit: Mobile Robot Guide

“Our university teams have proven that they can advance autonomous technology by setting world records with high-speed laps and now on the biggest technology stage at CES 2022, they will take it to the next level with a head-to-head passing competition,” said Paul Mitchell, president and CEO, Energy Systems Network. “The Consumer Technology Association and CES 2022 play a central role in advancing and showcasing autonomous technology worldwide, so we can’t think of a better partner for this next step of the competition.”

The university teams competing in Las Vegas include: