The key concern for BVLOS autonomous flight is avoiding other manned aircraft in the vicinity of the drone operations. The FAA has restricted these types of autonomous flights until now, as no viable solution to identify manned aircraft was available. The TASA sensor technology combined with advanced safety features of American Robotics’ Scout System enables a best-in-class Detect and Avoid (DAA) capability that is fundamental to meet and exceed the Federal Aviation Administration’s (FAA) expectations for safe drone flight in the National Airspace System (NAS) with no visual observers on the ground. 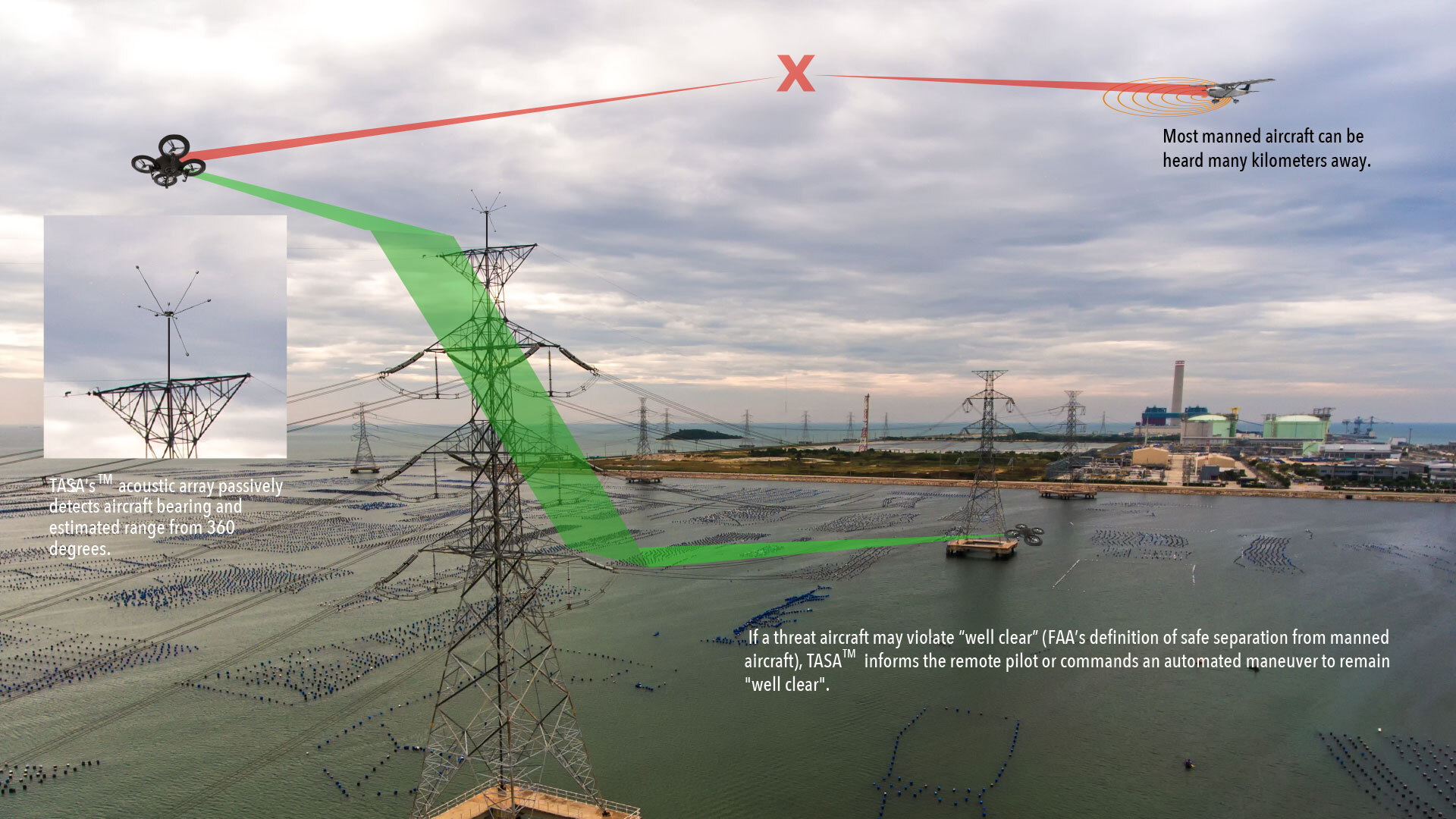 The Terrestrial Acoustic Sensor Array (TASA) is an acoustic phased array system that detects aircraft, classifies collision threats, and commands evasive maneuvers so that unmanned aircraft systems (UAS) can operate safely beyond visual line of site (BVLOS). TASA can detect aircraft even when line-of-sight is obscured by trees, buildings and terrain features.

This partnership and American Robotics’ recent landmark FAA approvals for BVLOS flight represents a pivotal inflection point in the commercial drone industry, as well as the FAA’s broader acceptance and understanding of autonomous drone technology. Advanced and proven DAA technology is a critical enabling factor for unattended operations and widespread drone adoption in commercial markets. This technology must be viewed from a systems perspective, encompassing a sensor’s ability to detect other aircraft, the drone’s ability to maneuver around the detected aircraft, and safely keep their distance in real-world environments.

The integration of SARA’s TASA into American Robotics’ Scout System enables superb maneuverability and system performance that exceeds the guidelines set by industry standards and was a key factor in proving to regulators that American Robotics’ drone-based aerial intelligence platform would operate safely in the NAS without visual observers on the ground.

“The FAA has rigorous requirements for drone companies to prove they can operate safely in the NAS without visual observers or pilots on the ground, and with other manned aircraft. For the drone industry to reach its multi-billion dollar potential and meet the safety regulations set by the FAA, there must be an ecosystem of competent and capable technology partners who work together to make automated commercial drones a reality,” said Vijay Somandepalli, CTO and co-founder of American Robotics. “The American Robotics and SARA partnership exemplifies the importance of working together to continue to propel the commercial drone industry forward.”

SARA’s TASA combines patented microphone technology and advanced signal processing algorithms, a single TASA unit detects aircraft bearing, approximates range, and determines aircraft threat status over a full 360 degree field-of-regard. TASA is tightly integrated with the American Robotics Scout System to ensure information transfer between TASA and Scout occurs reliably and with very low latencies. Once a manned aircraft is determined to be a threat by TASA and that information is passed to Scout, the Scout drone then executes a proprietary avoidance maneuver to steer clear of the threat aircraft. This ensures that both aircraft remain separated in space to assure the safety of both aircraft.

Jay Cleckler, Chief Technologist at SARA, said: “For drones to successfully collect valuable data, they must be able to function autonomously and operate in a safe and harmonious manner with other manned aviation that operate at low altitudes where drones typically fly. TASA has been proven capable of reliably detecting manned aircraft that are miles away in various demonstration tests with the FAA, and requires little infrastructure or power to operate. American Robotics is a great partner and their dedication to developing safe and reliable drone technology will truly help to advance the industry and commercial drone applications.”