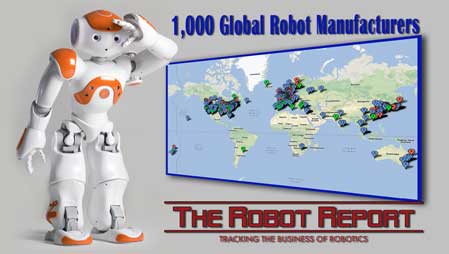 Click to explore the map.
Well… actually 1,070. Presented on this map are 1,050 robot manufacturers and the top 20 robotics universities and research facilities. Every type of company; every facet of the industry; most industrialized countries of the world are represented. From big companies like KUKA, ABB and Fanuc to start-ups like Redwood Robotics in California and Etnamatica in Sicily; from Iceland to Western Australia. These companies are robot makers; they may or may not also be robot users. That’s for another map.
Red markers reflect 200+ industrial robot makers; Green is for the 180+ start-up companies; and Blue is separated into two groups: “S” for service robots for governmental and corporate use while “P” covers service robots for private or personal use. Yellow is used to show the location of the top 20 robotic research and educational facilities. A country-by-country table is shown below.
The global map does not cover an additional 825+ ancillary businesses such as image systems, software developers, engineering and consulting firms, integrators and resellers, designers, servo, laser and stereo camera providers, etc. Nor does it cover 225+ other educational facilities and research labs. These can be found in our Ancillary Businesses and Educational and Research Facilities Directories.
The map is also limited by my own research capabilities, language translation limitations, and scarcity of information about robotics companies in emerging countries. It show a single entry for a company headquarters regardless how many branches, subsidiaries and locations that company might have.
In spite of all those caveats, at first glance I was impressed by the sheer quantity of the markers. One can easily see that many of the start-ups and service robotics companies are located near prominent Yellow-marked universities and research labs in clusters surrounding Carnegie Mellon, MIT and Harvard, UC Berkeley, Stanford and Willow Garage, the University of Tokyo and TITECH, etc. Or areas of innovation and energy like Seoul, Korea, Israel and New York City.
Red markers – industrial robot makers – stand out for their predominance in the industrial sections of the world: Germany, Switzerland and Central and Western Europe and the UK, Japan, Korea and the Great Lakes area of the US.
Blue markers – service robots (every other type of robot except industrial) are everywhere as are Green start-up markers. These are the emerging robotics companies in non-industrial robotics: robots used in healthcare, scientific labs, for defense and security, in academia, as toys, for remote presence and autonomous mobility underwater, on the ground and in the air and for a myriad of other uses.

There is a filtering option where you can just view start-up companies, or industrial robot makers, etc. Just choose your view from the options box just below the map on the left side.

This map will continue to grow above the 1,000 mark as I continue my research. If I’ve missed your company or companies that you know about, please send me a message.

Finally, for those of you who might be asking how and why this chart came to be, it happened because as I originally attempted to invest in stocks in the industry I found that there was a serious lack of information available about the industry. Most companies are not publicly-traded; they are privately held with no requirement to provide information. Thus I began an intensive research project that took me to Japan, Korea, China, Germany, France, Switzerland and all over the Internet. My eyesight has suffered but not my mind. I love what I’m doing and finding out. In an effort to share my research I set up The Robot Report to track the business of robotics. Later I started the Everything-Robotic blog to supplement The Robot Report with periodic in-depth reviews and insights. Recently I produced a map showing the location of start-up companies involved with robotics. This map replaces that one because it shows start-ups in a bigger context: in perspective to the overall robotics industry itself. I hope you find it useful and illuminating.